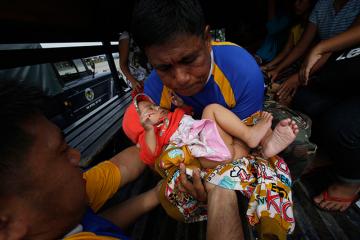 Yolanda survivors arrive in Manila. A young survivor who was evacuated from a disaster zone in Tacloban City is carried into an Army truck with her family after they arrived via a military plane at Villamor Air Base in Manila on Tuesday, November 12. Rescue workers are still trying to reach towns and villages in the central Philippines that were cut off by super typhoon Yolanda as relief efforts intensified with the help of US military. Reuters/Cheryl Ravelo

At least 200 residents of Tacloban City, which was ravaged last week by Super Typhoon Yolanda (Haiyan), arrived in Metro Manila Thursday evening aboard a C-130 plane.

The Tacloban residents included the elderly and children who were traumatized by the devastation caused by Yolanda, radio dzBB reported early Friday.

Some of the Tacloban residents were quoted in the report as saying their ordeal lasted two to three days as they tried to make sense of what happened to them.

An earlier dzBB report said some of the Tacloban residents admitted they do not have a place to stay while in Metro Manila.

They are to be temporarily sheltered at the Department of Social Welfare and Development’s facility at Jose Fabella Hospital in Manila, the dzBB report said.

Tacloban City was among the areas hit hardest by Yolanda, which ravaged parts of Visayas and Southern Luzon last week.

As of Thursday evening, the National Disaster Risk Reduction and Management Council said more than 2,000 had been left dead in Yolanda’s wake.  — ELR, GMA News