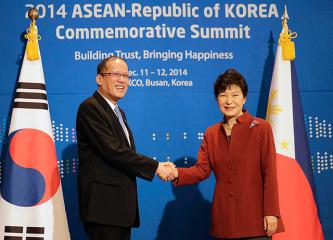 South Korea held a welcoming banquet for southeast leaders to celebrate the regional gathering on Thursday. The banquet is the first official event of the two-day summit.

“This commemorative summit is meaningful because it comes at a point where South Korea and ASEAN celebrate 25 years of friendship and will serve as the foundation to step up relations,” Park said.

The leaders are set to discuss ways to improve strategic partnerships at a meeting on Friday (December 12).

Park also held a bilateral meeting with Singaporean Prime Minister Lee Hsien Loong to strengthen the partnership between the two countries and cooperation in the economic sphere.

Diplomatic relations between Singapore and South Korea started in 1975.

Leaders of 10 Southeast Asian countries are scheduled to attend a welcome banquet later on Thursday, the first official event of the summit that is hosted by Park.