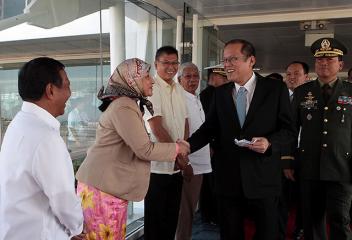 PNoy off to Brunei for 22nd ASEAN Summit. President Benigno Aquino III gives a last-minute talk to members of his Cabinet during send-off at the NAIA Terminal II in Pasay City on Wednesday. Aquino will be attending the 22nd ASEAN Summit in Bandar Seri Begawan, Brunei on April 25. At left is Vice President Jejomar Binay. Benhur Arcayan

The annual summit of the 10-member Association of Southeast Asian Nations (ASEAN) began in the capital of the oil-rich sultanate with a dinner in which the leaders were looking to rebuild unity after unprecedented infighting last year.

The split was over how much pressure the group should try to apply to China over competing territorial claims to the resource-rich South China Sea.

The Philippines and Vietnam, as well as China and Taiwan, claim parts of the sea, which is also home to some of the world’s most important shipping lanes as well as rich fishing grounds.

But a push by the Philippines and Vietnam for ASEAN to send a united message to an increasingly assertive China crumbled amid resistance from Cambodia, a close Chinese ally that held the rotating chair of the bloc in 2012.

Senior ASEAN figures emphasised ahead of the two-day summit that the group, which for more than four decades has operated by consensus, must work hard to find common ground on the South China Sea issue.

ASEAN leaders will make a united call in an end-of-summit statement for talks with China on the issue, but they will avoid any strong language, according to a draft of the document obtained by AFP.

“We reaffirmed our commitment to ensuring the peaceful resolution of disputes without resorting to the threat or use of force, through friendly consultations in accordance with universally recognised principles of international law,” the draft statement said.

The draft repeated a call made regularly by Southeast Asian countries for an “early conclusion” on a legally binding code of conduct for the sea between ASEAN and China.

But the draft made no mention of when they would hope to clinch a deal on the code.

Brunei had said one of its priorities as this year’s ASEAN chair was to see the code of conduct, initially proposed in 2002, agreed by the end of the year.

However China, which prefers to negotiate directly with individual countries rather than a united ASEAN bloc, has refused to begin meaningful talks on the code, and has given no indication it is willing to start negotiations soon.

President Benigno Aquino indicated on Wednesday that he would keep the pressure on his ASEAN colleagues over the issue, saying before he left Manila that he would argue a code of conduct needed to be signed “as soon as possible.”

Feuds over how to deal with China overshadowed most senior-level ASEAN meetings last year.

The Philippines and Vietnam are the most vocal critics of China, while Laos and Cambodia are regarded as Beijing’s staunchest allies in ASEAN.

ASEAN leaders have said that one of the other key issues on the agenda during the Brunei summit is pressing ahead with deeper economic integration within the bloc, and with other countries in the region.

The leaders are set to announce that ASEAN will begin negotiations next month with China, Japan, South Korea, India, Australia and New Zealand for a giant free trade pact, according to the draft end-of-summit statement.

The Regional Comprehensive Economic Partnership (RCEP) aims to tie together ASEAN’s free trade agreements with each trading partner, which would account for a third of the world’s economic output, and is being strongly backed by China.

ASEAN hopes to conclude the RCEP deal by the end of 2015, the same time as a single market for the 10 Southeast Asian countries is meant to be finalized.

The ASEAN Economic Community is one of the other top items on the agenda in Brunei this week.

Brunei’s Sultan Hassanal Bolkiah is hosting the summit at the prime minister’s new office, a dome-topped building with a forest of enormous pillars inside made of marble imported from Italy, and other extravagant features. — Agence France-Presse