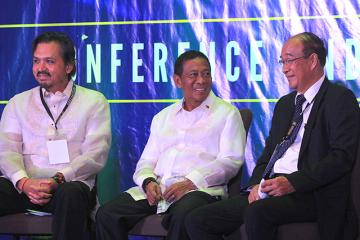 Vice President Jejomar Binay on Wednesday denied that he was already campaigning when he went to Cagayan and Isabela to bring relief goods to victims of typhoon Luis, a report on GMA’s “24-Oras” said Wednesday.

He said his visit to the Cagayan Valley an act to help victims of the typhoon after he was questioned for giving out t-shirts.

Meanwhile, members of the United Makati Against Corruption (UMAC) picketed outside the Vice President’s office in the Coconut Palace.

Binay and his son, Makati Mayor Jejomar Binay, are facinig plunder charges in connection with the P2.7-billion

Binay is set to deliver a public address around 2 p.m. on Thursday regarding the issue at the Philippine International Convention Center. —Andrei Medina/NB, GMA News