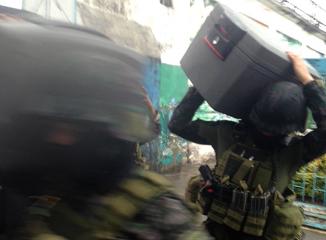 Drugs, cash, appliances found in drug lords’ den inside NBP. Members of the PNP Special Action Force haul away three safes seized from inside a kubol of a drug lord inside the New Bilibid Prison maximum compound in Muntinlupa City on Monday, December 15. Justice Secretary Leila de Lima, along with a company of fully-armed SAF, made a surprise inspection of the jail facility. John Consulta

(Updated 10:43 a.m.) A Jacuzzi, a sound system, an air-conditioner system and suspected drugs—these were among the amenities discovered inside the New Bilibid Prison during a surprise inspection Monday morning.

The inspection came amid reports that drug lords incarcerated in the penitentiary still managed to conduct transactions.

A total lockdown of the prison was implemented during the visit, radio dzBB’s Mao dela Cruz reported.

Meanwhile, photos tweeted by dzBB’s dela Cruz showed LCD TV sets, and band equipment including keyboards and a drum set in one of the inspected cells.

It was not immediately clear if the lockdown included jamming mobile phone signals as dzBB’s dela Cruz noted having problems using mobile phones when inside the facility.

It had been suggested earlier that jammers be used at the penitentiary to thwart drug lords who supposedly still managed to conduct transactions despite being locked up.

But former NBP head Dionisio Santiago said he encountered the problem as early as 2004—and did not quite succeed when using jammers.