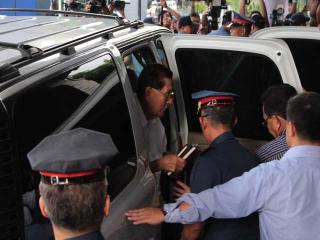 A day after undergoing a procedure to prevent blindness, Sen. Juan Ponce Enrile was brought to a Makati City clinic anew on Sunday.

Enrile was in a police convoy that headed for the Asian Eye Institute for a post-operative eye checkup, radio dzBB quoted GMA News’ Rida Reyes as saying.

A photo on Twitter showed the convoy heading for Makati via EDSA.

On Saturday, Eneile underwent a procedure to address macular degeneration, which could lead to blindness if not treated.

The 90-year-old senator had been detained at the PNP General Hospital since Friday after surrendering there.