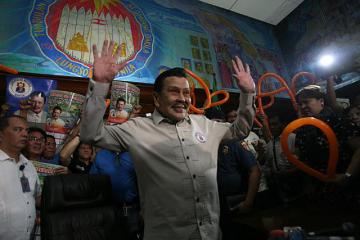 The 2016 presidential race just got more interesting now that the Supreme Court has ruled that Manila mayor Joseph Estrada can run for public office, a party-list lawmaker said Wednesday.

ACT-Teachers party-list Rep. Antonio Tinio said voters who are rooting for either Vice President Jejomar Binay or Senator Grace Poe might end up voting for Estrada should he should he make yet another bid for the presidency next year.

“Ang vote base niya (Estrada), iyon din ang potentially ang boboto for Binay and even for Grace Poe so this will make things interesting,” Tinio added.

Binay, who was Estrada’s running mate in 2010, is the frontrunner among presidential candidates in recent election surveys while Poe has consistently placed second.

Wednesday, the Supreme Court junked the disqualification case filed against Estrada by the lawyer of former Manila mayor Alfredo Lim.

Voting 11-3, the Supreme Court ruled that the pardon granted by former President Gloria Macapagal Arroyo to Estrada for his plunder conviction was absolute, thereby restoring his civil and political rights.

At least three senators have admitted that Estrada remains a force to reckon with in 2016, especially after the Supreme Court reaffirmed his eligibility to run for an electoral post.

Estrada, however, had said he plans to retire from politics next year since he has a “good vice mayor” who can continue the programs he has started for Manila.