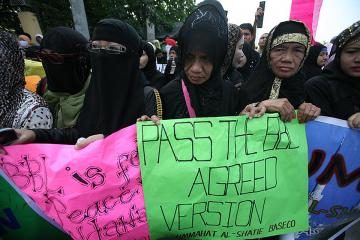 The establishment of the Bangsamoro territory will reduce the sovereignty of the Philippine government, a former Supreme Court justice said Monday.

“My understanding of the Bangsamoro Basic Law and the Comprehensive Agreement on the Bangsamoro is that the Bangsamoro government may change what presently exists in the Philippine government. If I am wrong, I will be very happy to be corrected,” Justice Florentino Feliciano said during the hearing of the Senate committee on constitutional amendments and revision of codes.

Florentino said the statement that “the Bangsamoro authority shall remain a part of Philippine territory” should be given a more forceful meaning.

He added the provision on the Bangsamoro government having exclusive power on several aspects such as agriculture, livestock, food security, laws on foreign corporations, trade and industry, foreign investments, labor, freeports, banking system, education, public utilities operations, ancestral domain and natural resources, land management and distribution, Shariah courts and Shariah justice system, and education would result to reduction of the general sovereignty of the Philippine government.

Feliciano said such changes can only be done if Congress convenes itself into a Constituent Assembly.

“Changing the Constitutuin is a serious business, it is not something you sleepover the weekend,” he said when asked by Senator Teofisto Guingona III if Congress cannot deal with the changes in its legislative authority but as a Constituent Assembly.

SC Justice Vicente Mendoza said there is no separation of state in the proposed Bangsamoro government, therefore no checks and balances.