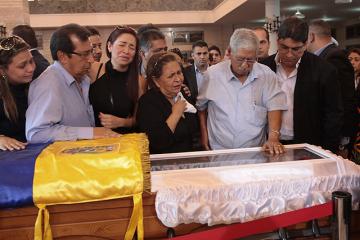 Remains of Venezuela ruler to be preserved for ‘eternity’ . Adan Chavez (2nd left), brother of the late Venezuela President Hugo Chavez, his mother Elena Frias (4th left), and father Hugo, view the remains of the Venezuelan ruler during a wake at the military academy in Caracas on Thursday. The late ruler will be embalmed and put on display ‘for eternity’ at a military museum after a state funeral and an extended period of lying-in-state, acting President Nicolas Maduro said on Thursday. Reuters/Miraflores Palace

A Philippine mortician famous for putting dead dictator Ferdinand Marcos into a glass display case offered his services Friday to the deceased Hugo Chavez, whom Venezuela wants embalmed “like Lenin”.

Manila-based embalmer to the stars Frank Malabed stressed experts must act quickly if they wanted to successfully preserve the Venezuelan president, who died on Tuesday from cancer.

“I have not been contacted for it but I am always expecting a call. I will process anyone, anywhere,” Malabed, 62, told AFP.

He said the methods employed would depend on the condition of the corpse of Chavez, who his successor said on Thursday would be preserved “for eternity”.

“What is important is they must not delay (choosing an embalmer). The longer they delay it, the more difficult it would be,” Malabed said.

While Venezuelan authorities said they wanted Chavez embalmed “like Lenin”, Malabed said he would not use the same techniques as those employed for the Soviet revolutionary leader.

“I was told they preserved Lenin using resin. It’s like making a block of ice. You have a box, you pour water on it and freeze it. If I were asked to do it (embalm Chavez), I would do it differently,” he said.

Malabed detailed some chemicals that would need to be used.

“You need to inject fluid into the arteries after draining blood from the veins. You use a hypodermic needle for that. Then you replenish it regularly. It has to be checked regularly to arrest any sign of decomposition,” he said.

Malabed honed his skills as a young man helping his father embalm thousands of American soldiers killed in the Vietnam War, working at a converted hangar at a US air base north of Manila in the 1960s.

He built his reputation working on his own embalming practice in Manila from the early 1970s, then became so well respected in the business that he was tasked to embalm the body of Marcos after he died in exile in 1989.

“In the case of president Marcos, it was difficult work. He was a vegetable. The body was full of oedema (fluid),” he said.

Marco’s body remains on display at the family’s ancestral home in the northern Philippines.

Malabed continues a successful business in Manila, where he is often called to work on celebrities, politicians and other high-profile figures. – Agence France-Presse