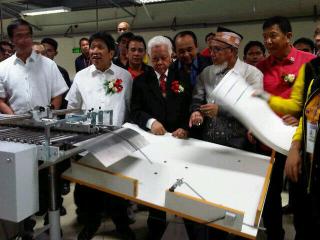 For finishing the printing of more than 52 million ballots three weeks ahead of schedule, 485 personnel of National Printing Office (NPO) may receive bonuses as high as P25,000 for their “record-breaking performance,” officials said Wednesday.

Presidential Communications Operations Office (PCOO) head Herminio Coloma Jr. said he has recommended to the Department of Budget and Management the giving of performance-based bonus to NPO employees, and that he is just waiting for the agency’s decision.

The NPO is under PCOO.

Coloma also announced that he is giving NPO director Emmanuel Andaya a free hand to decide on how much the employees will receive.

He added that the NPO also decided to give to its workers the funds saved due to the early end of the ballot printing.

To see is to believe

Some NPO employees welcomed the announcement, although they maintained a to-see-is-to-believe attitude.

Others expressed apprehension that only the high-ranking officials will be given the higher bonus.

The three admitted that they did not receive any bonus in 2010.

In a separate interview with reporters, Coloma said he is happy with NPO’s performance as it was able to finish printing 52, 333, 801 ballots in just 57 days. The initial schedule was from February 4 to April 25.

He further said that the government was able to save P277 million in ballot printing this year compared in 2010.

The last batch of ballots printed were for Barangay 186 in Pasay City.

Brillantes said the ballot printing cost this year was lower because a bidding was conducted unlike in 2010 when all the contracts were given to Smartmatic.

“May bidding aspect ito. Nung 2010, Smartmatic lahat, so it was private contracting. Ngayon may bidding so napunta kami sa mababa. The bidding conducted by NPO, awarding it to Holy Family, very reasonable ‘yung presyo at napakaganda ng performance at a very low price,” he said.

He admitted that he was surprised with the pace of the printing. “This is really record-breaking. I think this should set the manner of printing by NPO for all subsequent printing of all elections in the future.”

Asked when the ballots will be delivered, Brillantes refused to give details due to security reasons.

“Hindi namin sinasabi kailan. May security features ang deployment kasi. From here it will go to another warehouse, then it will go to our [regional] hubs, tapos distribute sa provinces, then cities hanggang sa presinto,” he said.

The poll chairman boasted that with all the ballots already printed, Comelec is ready for the elections.

“Hindi na po kami mapipigilan. Tapos na lahat. Everything is in the implementation stage. Tapos na lahat ng preparations. This is the evidence that we are ready for the 2013 elections,” Brillantes said. — KBK, GMA News