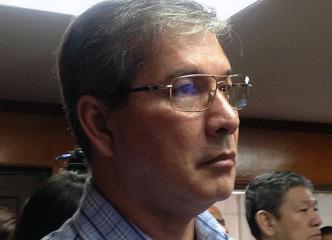 Dennis Roldan found guilty of kidnapping Fil-Chi boy in 2005. Former Quezon City congressman and actor Dennis Roldan listens as the guilty verdict was handed down by Pasig RTC Judge Rolando Mislang on Tuesday, August 26, over the 2005 kidnap for ransom of a Filipino-Chinese boy. Two other co-accused were also found guilty of the crime. Mariz Umali

From the hard court to the House of Representatives to National Bilibid Prisons, Dennis Roldan — convicted Tuesday for the kidnapping of a Filipino-Chinese boy in 2005 — has spent most of his adult life in the limelight, whether he liked it or not, or for good or bad.

A report on “24 Oras” on Tuesday said Roldan, real name Mitchell Gumabao, first made a name as a professional basketball player in the Philippine Basketball Association (PBA) in 1983.

He later on left the hard court for a stint in showbiz, starring in several movies and soap operas for years. It was while in showbiz that he adopted the name Dennis Roldan.

Politics hooked Roldan in the 90s. He initially served as councilor in Quezon City then as third district representative from 1992 to 1995.

However, things started to go south for Roldan in March 2002 when he accidentally ran over an 11-year-old child in Quezon City. Although the victim died, no charges were filed against Roldan, who shouldered the kid’s hospital and burial bills.

Then in 2005, he and several others were arrested for the kidnapping of then-three-year-old Kenshi Yu. The charges that would later lead to his conviction were filed in March that year with the Pasig Regional Trial Court.

Roldan, tagged as the mastermind in the kidnapping, had denied the accusation in an exclusive interview with GMA News. That year, he was tested positive for use of illegal drugs.

Also in March 2005, his alleged lover, Suzette Wang, faced the Department of Justice after she was linked to the kidnapping. She was reported a friend of the victim’s mother.

Wang denied the accusation. She remained at large up this day.

In July 2006, Roldan was granted temporary freedom after posting a P500,000 bail. He spent more than a year inside the Pasig City Jail.

Three years after the kidnapping incident, or in April 2008, Roldan’s victim testified in court and positively identified him as his abductor, referring to him as “big boss.”

Nine years after the case was filed, the court handed down a guilty verdict on Roldan and his co-accused. He was sentenced to life imprisonment.

“We’re happy that finally, justice is served,” said anti-kidnapping crusader Teresita Ang-See in a report on “24 Oras” on Tuesday. “This should serve as discouragement to all kidnappers.” —Rie Takumi/KBK, GMA News