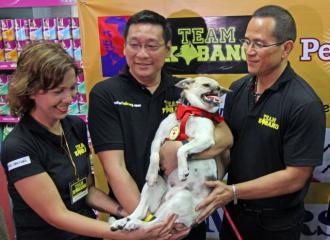 The residents of Zamboangga City will be giving a hero’s welcome to the now internationally-famous dog Kabang, who arrived in the Philippines on Saturday after her eight-month treatment in the United States.

Kabang’s owners — Rudy and Cristina Bunggal — and the hero dog’s fans are eagerly awaiting her arrival in Zamboanga on Sunday, according to a report of Kara David for “24 Oras.”

Kabang’s owners said even the pup that the dog left behind before going to the US, is also excited about the hero dog’s arrival.

The couple’s niece, Mary Jane Manuel said, they are happy that Kabang, who became famous for heroically saving two young girls from a road accident, is finally headed home.

Zamboangga residents have readied a motorcade and a meet-and-greet- for the hero dog.

Balitanghali’s Katrina Son said Kabang arrived at the Ninoy Aquino International Airport around 3:00 a.m. on Saturday and was mobbed by local media.

The hero dog seemed to look healthier and more cheerful after undergoing reconstructive surgery to close the gaping wound on her face.

Lim accompanied Kabang both on his flights to and from the US.

The surgery is not cosmetic but is meant to prevent Kabang from being infected because of her open wound.

“She’s as normal as she can be. She doesn’t need any special medication,” Lim explained.

He also said that there are plans to train the hero dog so she could be used in therapy.

“She’s a hero not just in the Philippines but all over the world so ang kwan [goal] natin is to make her an ambassador of “dog will” and to promote responsible pet ownership,” he said.

Kabang, who lost her snout and upper jaw as she saved two girls from being run over by a motorcycle, is now being hailed as the “Pride of Zamboangga.”

The city veterinarian office also hopes that Kabang would be able to help in their anti-rabies programs and other projects involving care for street dogs.

The hero dog started to gain international renown after her heroic story became viral on the internet in 2012.

Kabang had the chance to have her gaping wound closed with the help of the group “Care for Kabang” which raised over $20,000 for her reconstructive surgery at the  University of California (UC) Davis.

Before undergoing surgery, however, Kabang had to be treated for genital cancer and heartworm disease.

Earlier this week, Kabang’s medical team at the UC Davis bid the hero dog goodbye before her flight to the Philippines.

After her long ordeal, Kabang is finally a step closer to being reunited with her family in Zamboangga. – Andrei Medina, VVP, GMA News