You’ve got to admire Scarlett Johansson’s career trajectory of late — from indie films to Woody Allen to blockbuster superhero franchises, without losing a step in her high heels. But the most surprising direction she’s taken has been a trilogy of science fiction flicks that explore what it means to be a future woman.

Her wasn’t supposed to feature her, of course. But director Spike Jonze replaced Samantha Morton’s voiceover and Johansson took over the purring tones of Joaquin Phoenix’s OS. The computer operating system, called Samantha, eventually evolves beyond human consciousness to some kind of singularity, a point where artificial intelligence transcends us. Scarlett had left the building, and was now part of the ethernet consciousness, an uber-being that understood everything about love, human frailties, and our potential.

Then there was Under the Skin, Jonathan Glazer’s meditative/arty take on Michel Faber’s science fiction novel. In it she played an alien seductress who picks up Scottish hitchhikers and lures them to their unfortunate demise. The movie was notable for Johansson’s deadma stare and quiet authority, as she investigated a planet (Earth) she found more and more beguiling.

Under the Skin was certainly oblique, filled with long, unsettling shots and little dialogue, almost like a Kubrick film in its reluctance to be easily understood.

Lucy, directed by reigning French pop director Luc Besson, doesn’t have that problem. It wants to be understood. And Besson, whose career has often focused on strong heroines (Anne Parillaud in Nikita, a young Natalie Portman in Léon: The Professional, wife Milla Jovovich in The Fifth Element), injects Johansson into the mix as a hapless victim of drug smugglers who turns the tables and becomes an uber-being bent not on revenge, but infinite knowledge.

Lucy’s premise may sound familiar to those who saw Bradley Cooper in Limitless, but this is a much more thoughtful, not to mention exciting, film.

Lucy is a young party girl in Taiwan who finds herself handcuffed to a metal briefcase and sent to deliver it to a scruffy Korean gangster (Choi Min-sik). She’s quickly enlisted against her will in a drug smuggling operation in which bags of blue crystal (shades of Breaking Bad) are surgically inserted in her tummy. Before she knows it, she’s somehow unsettled the contents inside her, ingested way too much, and suddenly finds her brain to be a much more useful tool than previously imagined.

The whole “10 percent of the brain” concept is introduced and explored by cutaways to Professor Norman (Morgan Freeman), a brain researcher who speculates what we’d accomplish as a race if we harnessed even double our usual amount of brain matter — things like self-healing, moving physical objects, etc. He can’t even imagine what humans could do if they used 100 percent of their brains.

Lucy finds herself on the run and pairs up with a cop (Amr Waked) who helps her gather up the remaining blue crystal in order to accomplish that very goal.

Besson’s script is sharp and witty, and filled with something that’s almost alien to Hollywood these days: ideas. Actual thought. The premise is that the blue crystal drug is a synthetic version of CPH4, something that expectant mothers manufacture naturally to spur their fetuses to phenomenal growth in the womb: bones, brain tissue and limbs sprout under this natural wonder drug. But taken as a party drug, it can have unfortunate consequences, as Lucy discovers.

Lucy is, at times, silly, swerving without a care from thoughtful study on human consciousness to full-bore car chase flick, or John Woo parody. In truth, Besson helped create the whole genre of overbaked revenge flicks where bad guys wear scruffy beards and suits (think Gary Oldman in Léon), and pack an automatic pistol in each hand. Eventually, Lucy doesn’t need all of that: she can merely focus her brain waves on her assailants, and their guns take flight. Then their bodies float to the ceiling.

Lucy has other useful tricks, such as zeroing in on people’s cell phone waves — depicted as rainbow-like filaments rising from people’s heads in a crowd — and locating her pursuers. She learns languages instantly, manipulates radios, TVs and other electronics, and drives like Gene Hackman in The French Connection.

Her one problem is time. Time is rapidly breaking down her system, and she needs more of the drug to do what Professor Norman intones is our whole purpose as a species: to pass along our genetic information. With little time to have a kid, Lucy must do the next best thing: find out how to download her consciousness into a portable form.

Having said all that, Johansson here is not the best she’s been. When she starts getting real, real smart, she takes on a robotic voice that’s a little annoying at first. You can’t tell if she’s trying to sound like HAL from 2001 or the robot from Lost in Space. But her character is essentially plucky, a survivor, so you’re quickly back to rooting for her. Action roles do suit her, as Avengers fans know.

Whether Johansson took these successive roles as some sort of career path is unclear. She has expressed irritation at being thought of as merely a celebrity (supposedly, she finds the term “ScarJo” really demeaning, like she’s some kind of pop star). Yet media tend to focus on the many “Sexiest Woman” titles she’s racked up, or how she behaves behind the scenes. With this trilogy of films, Johansson may be in the process of redefining herself. Each entry features a strong central woman character that is trying to figure out her role in a rapidly changing, often baffling world. From Her to Under the Skin to Lucy, Johansson has chosen to inhabit characters that point to a future consciousness, a future world, and perhaps a future woman. 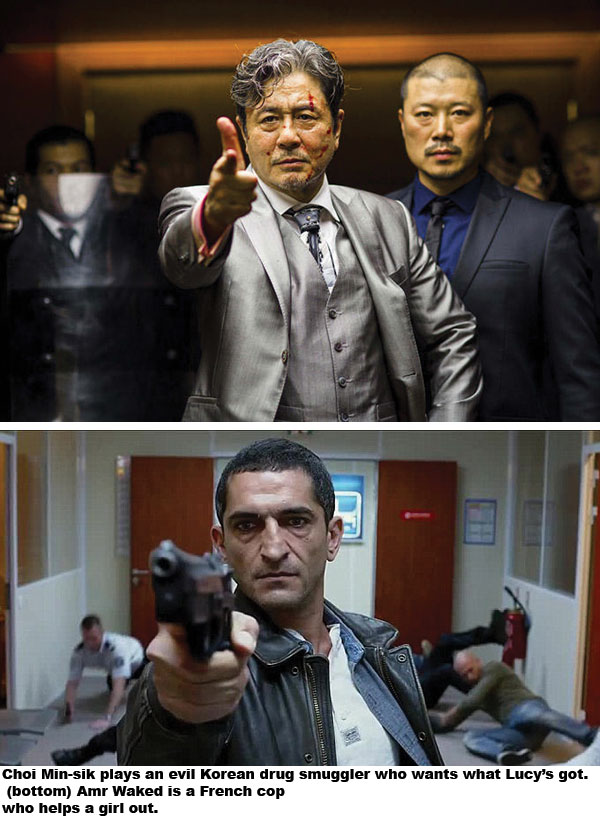