After enhancing the southwest monsoon that has dumped rain over a wide swath of Luzon in the past several days, Tropical Storm Maring (Trami) is moving erratically and may linger inside the Philippine area of responsibility until Thursday.

Large parts of Metro Manila are already flooded, with classes suspended in most areas.

PAGASA forecaster Manny Mendoza said Maring is interacting with another weather system outside the Philippine area of responsibility and has repeatedly changed direction.

When asked when Maring will exit the Philippine area of responsibility, Mendoza said their models show it may do so on August 22, Thursday.

However, he said there is also a chance Maring may exit the PAR on Friday.

Mendoza said their models show Maring appears headed for the southern islands of Japan but may change direction until it heads for Taiwan. 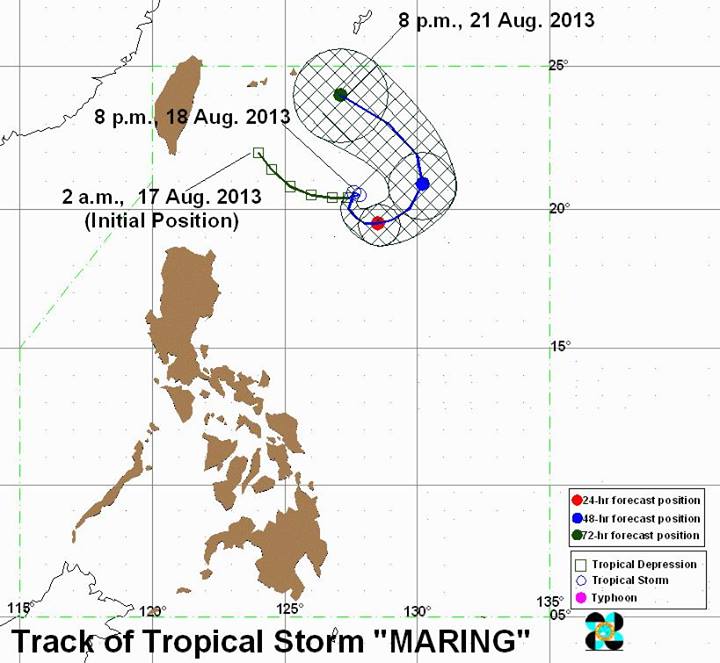 Tropical Storm Maring seemed to make a U-turn over the Pacific Ocean section northeast of the Philippines and east of Taiwan.

PAGASA said that as of 4 a.m., Maring was estimated at 550 km east of Itbayat, Batanes, with maximum winds of 75 kph near the center and gustiness of up to 90 kph.

It is forecast to move northeast at 7 kph.

Also, PAGASA said the southwest monsoon is affecting much of the country.

“Metro Manila, Ilocos Region, CALABARZON and the provinces of Benguet, Zambales, Bataan, Mindoro, Marinduque, Romblon and Bicol region will experience monsoon rains which may trigger flashfloods and landslides,” it said in its 5 a.m. bulletin.

PAGASA said Western Visayas, Zamboanga Peninsula and the rest of Luzon will have “cloudy skies with light to moderate rainshowers and thunderstorms.”

The rest of the country will be partly cloudy to cloudy with isolated rainshowers or thunderstorms.

Moderate to strong winds from the southwest will prevail throughout the archipelago and the coastal waters will be moderate to rough, PAGASA said.

As of 5 a.m., parts of Manila, Quezon City, Makati City and southern Metro Manila remained flooded, with the Buendia off-ramp from the Skyway closed to traffic.

Skyway authorities, in an advisory posted on its Twitter account at 5:26 a.m., said the Buendia off-ramp was “still closed to traffic.” The Skyway is the express elevated highway between Makati and Alabang.

Earlier, it had noted floods near Raya Garden, Ireneville and Water Fun.

In Makati City, several streets were not passable to light vehicles as of 5:40 a.m.

These included parts of Barangay Palanan, where floodwaters were 12 inches high and rendered the streets “not passable to light vehicles”.

Earlier, dzBB reported parts of Manila and Quezon City were still flooded as of early Monday, in the wake of heavy rain since Sunday night.  — ELR/HS, GMA News