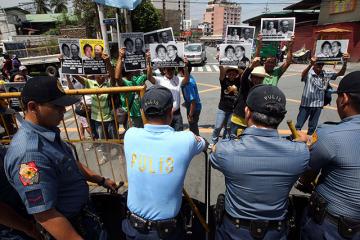 Militants rally near Aquino residence. Policemen block activists from staging a protest rally near the house of President Benigno Aquino III along Times Street in Quezon City on Thursday, August 21. The protesters were condemning the the proposed Charter change and term extension of the president. GMA News

In a statement, Anakbayan national chair Vencer Crisostomo said if Ninoy was still alive today, he would have been “infuriated” at Aquino for saying he is open to calls to extend his stay in power through Charter change.

“Noynoy’s undemocratic plans of using Cha-cha for term extension, curbing the powers of the Supreme Court, and filling his legislature of yellow zombies will surely infuriate Ninoy,” he said.

He said a protest rally is set at the Luneta Park in Manila on August 22 and 25 against the possible term extension of Aquino.

Earlier this month, Aquino, in a television interview, said he is keeping his options open on calls to extend his stay in power beyond 2016, even if the 1987 Constitution ratified under his late mother Corazon’s presidency allows only one six-year term for a President.

No to term extension

Meanwhile, members of the Promotion of Church People’s Response  gathered on Thursday at the Ninoy Aquino Monument in Quezon City to protest Aquino’s “openness” to extending his term.

“We pause in genuine respect for the struggle and sacrifice of Ninoy Aquino against the then dictator Ferdinand Marcos. And at the same time, we hope that this can be a teachable moment for his son, who seems to have lost his way,” PCPR’s Rev. Marie Sol Villalon said in a separate statement.

“We don’t want another dictator. We don’t want any term extension.  We want checks-and-balances between the branches of government and respect for the Constitution,” he added.

For its part, the Kalipunan ng Kristiyanong Kabataan sa Pilipinas said Aquino has been “intoxicated with an idea that only he is good enough in our country.”

“We want to remind him that democracy by its definition draws on the perspectives and brilliance of the majority,” said KKKP’s Snap Mabanta.

Other groups such as Bukluran ng Manggagawang Pilipino, Sanlakas and Kongreso ng Maralita ng Lungsod also converged at the Ninoy Aquino Monument to offer flowers. They held a program before marching toward Aquino’s residence on Times Street to protest the President’s interest in prolonging his stay in power.

“We may talk endlessly of the contributions of Ninoy in the struggle against the dictatorship and his selfless dedication to the ideals of a democratic nation but more importantly, we are compelled by a higher political circumstance to launch intensified mass actions for the reason that a looming dictatorship is in the offing,” said Sanlakas secretary general Atty. Aaron Pedrosa.

“If Noynoy truly listens to his ‘bosses’ as he claims to do so, he should have clearly heard it by now that his concocted Charter Change and term extension is not the will of the people. It is also not the answer to widespread joblessness, uncontrollable price hikes of basic commodities and the dismal failure of his bureaucracy to address the needs of the nation,” he added.

For his part, Kabataan party-list Rep. Terry Ridon said if Ninoy was alive today, “he would have been the first to call out his son’s dictatorial tendencies.”

“It is sad and frustrating that the son is barely living up to the ideals and legacy of the father,” Ridon said, pointing out that Aquino’s recent political moves were similar to Marcos’ rather than his father’s.

“Ninoy fought against the dictatorship through fiery speeches inside and outside Senate. The late senator fired up the Filipino nation’s fighting spirit by exposing the Marcos regime’s excesses and crimes. Yet, more than three decades after his death, here is his son, Noynoy, vainly trying to consolidate power for himself by floating the idea of clipping the Judiciary’s power and lifting term limits,” he said.

“PNoy has to go. His administration was not able to alleviate poverty in urban communities, failed to address the issue of unemployment and there was no response on the plight of workers for living wage,” said Mark Gonzales, head of Planters Bank Employees Association.

“We, workers and community members, see bleak future if Aquino remains in office, much worse, if he gets extended,” he added. —KBK, GMA News