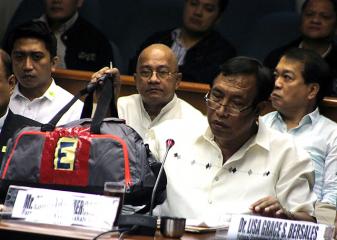 Mercado: VP Binay got 13% cut from every Makati project . At the Senate blue ribbon subcommittee probe on the alleged overpriced Makati City Hall Building II on Thursday, September 11, former Makati City vice mayor Ernesto Mercado said Vice President Jejomar Binay received 13-percent kickback from every project during his term as city mayor. He said the money was always delivered in three bags, one of them for Binay’s son Junjun, the incumbent Makati mayor who was a former city councilor. Benjie Castro

Senator Nancy Binay on Thursday said she would pray that former Makati Vice Mayor Ernesto Mercado would be enlightened and tell the truth on the issue of the alleged overpriced Makati City Hall Building II.

In an interview with reporters, Binay joked that Mercado could have been “possessed” when he testified before the Senate Blue Ribbon Committee hearing on Thursday.

The senator said she was especially hurt that Mercado, a principal sponsor in her wedding, was lying at the expense of the Binay family.

Binay denied Mercado’s accusation that she received the kickbacks supposedly for her mother, Dra. Elenita Binay.

She said the only time she received anything from Mercado was during her wedding and it was not even cash.