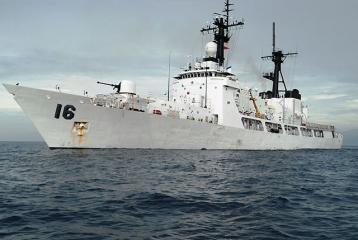 PHL’s new warship sails along Aurora coast . The BRP Ramon Alcaraz sails off the coast of Aurora province on Friday, August 2, after it entered the Philippine Area of Responsibility on Thursday. Filipino fishermen greeted the crew as it journeyed for Subic Bay. The 115-meter Hamilton-class cutter of the Philippine Navy is expected to be welcomed by President Benigno Aquino II on August 4. Ronald Leander

He said the vessel’s crew members, which include 14 officers under Capt. Ernesto Baldovino and 74 enlisted personnel, are in high spirits.

Fabic said the vessel’s crew are excited to meet their loved ones in the Philippines again.