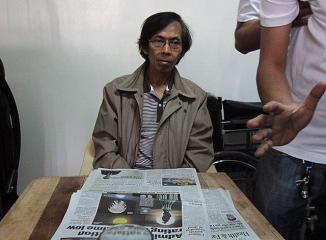 NBI presents Palparan to the media. Retired Maj. Gen. Jovito Palparan is presented to the media after he was arrested by National Bureau of Investigation agents at a house in Sta. Mesa, Manila before dawn Tuesday, August 12. A Bulacan court issued in 2011 an arrest warrant against Palparan, who is charged with two counts of kidnapping and serious illegal detention of University of the Philippines students Sherlyn Cadapan and Karen Empeño. Roy Lozano

Security and health concerns hound the transfer of captured retired Maj. Gen. Jovito Palparan Jr. from the National Bureau of Investigation in Manila to the Bulacan Provincial Jail.

The Bulacan court earlier ordered Palparan transferred from the NBI in Manila to the Bulacan Provincial Jail. Palparan has been detained at the NBI since his arrest before dawn Tuesday.

In 2011 it issued an arrest warrant against Palparan, who is charged with two counts of kidnapping and serious illegal detention in the alleged abduction of University of the Philippines students Sherlyn Cadapan and Karen Empeño in 2006.

He has denied involvement in the incident.

Aside from security risks, Vallejo said another concern for the NBI is Palparan’s health.

He said they are awaiting the results of blood chemistry and blood count tests on Palparan, along with the advice of Palparan’s doctors on whether he is fit to travel. — Joel Locsin /LBG, GMA News