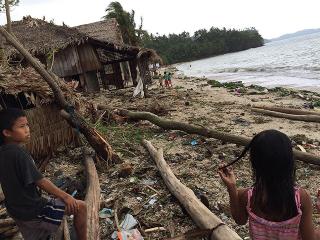 Ruby damages houses in Matnog coastal villages. Residents on Monday, December 8, look at several houses that were damaged by Typhoon Ruby (Hagupit) at a coastal village in Matnog, Sorsogon on December 7. The Philippine Red Cross said at least 21 were killed due to the typhoon, most of them in Samar. Joseph Morong

The National Disaster Risk Reduction and Management Council on Tuesday confirmed a third fatality in the wake of Typhoon Ruby (Hagupit), and is presently verifying at least eight more.

The NDRRMC also said they expect people evacuated from their homes due to Ruby to start returning to their homes soon.

Ruby on Tuesday weakened into a tropical depression, days after lashing parts of the Visayas, Bicol and southern Luzon.
The NDRRMC said they have so far confirmed and validated three deaths related to Ruby. The death toll it recorded stood at two as of Monday.

But the agency also said that while eight more have been confirmed dead, their cases will have to be validated before they are included in the NDRRMC’s list.

The Philippine Red Cross had already recorded at least 23 deaths as of early Tuesday.

“Ongoing ang official validation,” the NDRRMC said, adding they are waiting for validation by the Department of Health.

Also, the agency said at least 45 were reported injured.
Meanwhile, the NDRRMC said the estimated damage to property caused by Ruby has breached the P1-billion mark.
It also said 19 provinces in six regions have experienced power outages.
Three roads in Bicol and Eastern Visayas remained closed to motorists due to floods and landslides. —Joel Locsin/KG, GMA News