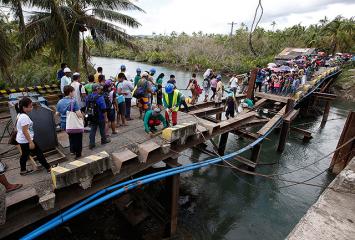 Samar roads and bridges damaged by Ruby. People cross a bridge which was damaged by Typhoon Ruby (Hagupit) in San Julian, Eastern Samar on Wednesday, December 10. Emergency response teams are struggling to reach coastal villages in Samar which was hardest hit by Ruby where thousands of homes have been wrecked, suggesting the Red Cross’s estimated death toll of 27 may rise. Reuters/Erik De Castro