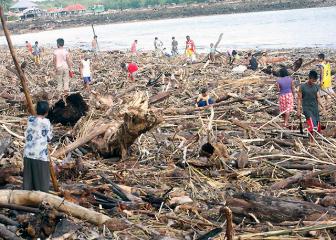 Forest debris awashed by Seniang litter shores of Misamis town. People sift through logs, sticks and dead animals washed on the shoreline of Talisayan, Misamis Oriental on Wednesday, January 7, after some of their huts were destroyed by the debris that reportedly came from Agusan and Surigao provinces following strong rains brought by Typhoon Seniang. Gerry Gorit

The damage from Tropical Storm Seniang rose to P809.9 million as of Friday, the National Disaster Risk Reduction and Management Council said.

In its 8 a.m. update, the NDRRMC noted increases in the damage caused by Seniang to both agriculture and infrastructure.

On the other hand, the death toll remained at 66, with 43 injured and six missing.