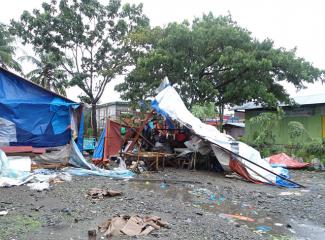 Aurora hardest hit by Labuyo. A stall is blown away by the strong winds brought by Typhoon Labuyo (Utor) in Baler, Aurora province on Monday, August 12. Ronald Leander

The death toll from Typhoon Labuyo (Utor) rose to eight even as four people remained missing as of Thursday morning, the National Disaster Risk Reduction and Management Council said.

In its 5 a.m. update, the NDRRMC identified the latest fatality as Ronald Borja, 27, from Sitio Amutan in Barangay Matawe in Dingalan, Aurora.

At least seven were injured while four are still missing, it added.

Meanwhile, Quirino province and Dinalungan, Casiguran and Dilasag towns in Aurora were placed under a state of calamity.

Of the affected families, 151 families or 658 people are still staying in six evacuation centers.

At least 31 roads—including 14 in Central Luzon and 15 in Cordillera—remained impassable due to floods or rockslides.

The NDRRMC also said six bridges, five in Central Luzon and one in Cagayan Valley, remained impassable. Bridges in Isabela, Quirino and Cagayan are now passable.

However, communications remain cut off in Dipaculao, Dinalungan and Casiguran in Aurora.

Still flooded as of 5 a.m. Thursday are three barangays in Carangalan in Nueva Ecija; one in Dinalupihan in Bataan; 15 in Masantol in Pampanga; and four in San Simon in Pampanga.

Also flooded are some parts of Macabebe, Pampanga and Sta. Cruz, Zambales. Floods in Candaba and Guagua in Pampanga have subsided.

Placed under a state of calamity are: