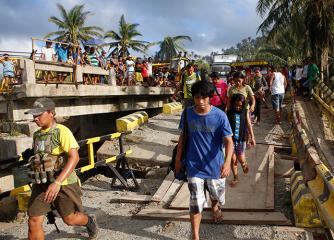 Infra damage from Ruby nears P2B. Residents walk on a detour bridge on Tuesday, December 9, after the main bridge was damaged by Typhoon Ruby (Hagupit) in San Julian, Eastern Samar on December 6. Nearly 13,000 houses were destroyed and more than 22,300 damaged in Samar where Ruby made landfall. Reuters/Erik De Castro

The number of confirmed fatalities from Typhoon Ruby (Hagupit) rose to 11 as of Wednesday afternoon, the National Disaster Risk Reduction and Management Council said.

In its 1 p.m. update, the NDRRMC said two of the latest fatalities were from Sulat in Eastern Samar, and were hit by an uprooted tree.

According to the NDRRMC, the latest confirmed fatalities were identified as:

The NDRRMC also said that as of Wednesday, only two vessels remained stranded in Palawan due to rough sea conditions.

Meanwhile, the NDRRMC said damage caused by Ruby was estimated at P2,550,065,744 in infrastructure and agriculture in Southern Luzon, Bicol, Western Visayas, and Eastern Visayas.