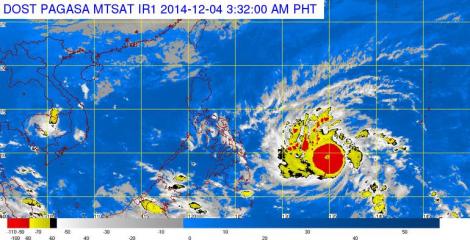 Typhoon Hagupit enters PAR Thursday morning. “At 4:00 am today, the eye of Typhoon “RUBY” was located based on all available data at 942 km East Northeast of Hinatuan, Surigao del Sur or 1,023 km East of Surigao City (9.4?N, 134.8?E), with maximum sustained winds of 175 kph near the center and gustiness of up to 210 kph. It is forecast to move West Northwest at 25 kph. Northeast monsoon affecting Northern Luzon,” PAGASA said Thursday in its 5:00 a.m. bulletin. PAGASA

The head of the Catholic Bishops’ Conference of the Philippines on Thursday asked churches and schools to open their doors to those who may be displaced by Typhoon Ruby (Hagupit).

“I appeal to our Catholic churches and schools to open their doors to refugees and those badly in need of shelter, particularly those already displaced by Yolanda,” he said.

Yolanda had left more than 6,300 dead after ripping through the Visayas.

But Villegas also reminded the evacuees who are allowed shelter in churches to respect the sacredness of the place.

“I request only that evacuees remember the sacred character of the churches they occupy, should they do so,” he said.

Villegas also called for prayers from all Filipinos, especially those far from the danger zone.

Meanwhile, he pleaded with government officials and non-government organizations to commence evacuation now.

“To wait any longer may be disastrous. There is no such thing as an excess of caution, especially when faced with a danger so severe,” he said.

In the meantime, he said he and his brother-bishops “commend the entire nation to the mercy, love and providence of our Father.”

“Lord, spare our land from this typhoon!” he added.