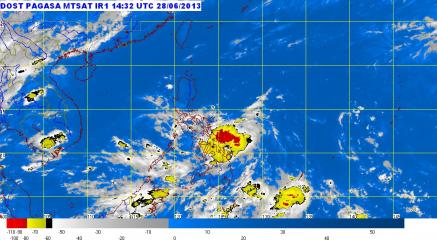 Hernani is 56 kilometers south of Borongan, the provincial capital of Eastern Samar.

According to the website of the municipality of Hernani, the area is a coastal town and fishing is the second biggest source of income for the 7,900 inhabitants.

For Hernani residents who may be affected by the storm, the website lists the following contact numbers:

PAGASA on Friday put five provinces in Visayas and Mindanao under Public Storm Warning Signal No. 1 after Low Pressure Area near Surigao City developed into a tropical cyclone a day before.

“Gorio,” the seventh cyclone to hit the Philippines this year, is expected to hit Northern, Western, and Eastern Samar as well as Dinagat and Siargao Islands in Mindanao, which were put under the lowest storm signal level.

On Saturday, PAGASA said light to moderate rains are expected over Metro Manila and nearby provinces.

In its 6:00 a.m. report, the NDRRMC said the Coast Guard in Bicol canceled trips bound for Samar as early as Friday noon.

The NDRRMC also said all ferry terminals in Eastern Samar, Western Samar and Northern Samar were “suspended as of 6:00 a.m. (Friday).”

Office of Civil Defense Eastern Visayas head Rey Gozon called for preemptive evacuation in areas to be hit by Gorio, including Leyte and Biliran.

The NDRRMC also said it had been on blue alert since 5 p.m. Friday.

It said the Navy in Bicol is on standby and is monitoring the situation, while the Air Force in Eastern Visayas is on standby for possible deployment.

For its part, the Coast Guard in Tacloban and Catbalogan is continuously alerting and advising fishermen and small seacraft not to venture out to sea.
– VVP, GMA News