Oil affects countries around the world differently.  With oil prices plunging below $60 per barrel last Friday, oil producers such as Russia, Norway and OPEC members are the obvious losers.  Meanwhile, China, Japan, India, Philippines and other net oil importing countries are the clear winners.

A global supply glut, weak demand and a strong dollar have pushed oil prices to five-year lows.  Oil supplies continue to surge, particularly in North America where the shale boom is expanding US oil production to a 28-year high.  Meanwhile, the International Energy Agency (IEA) cut its forecast of global oil demand for 2015 by 230,000 barrels per day (bpd) to 900,000.

Conspiracy theorists are also blaming the sharp drop in oil prices as moves against Russia, Iran, Iraq and ISIS.  Iran even came out blaming unnamed countries of plotting to bring down crude prices, saying that the reason behind the fall in oil prices is not entirely economic but also political.

Another theory is an all-out price war between the Organization of Petroleum Exporting Countries (OPEC) and the US shale industry after Saudi Arabia refused to cut oil production despite the OPEC’s lower projection for oil demand.  Saudi Arabia currently produces oil at less than $10 per barrel while US Bakken Shale costs anywhere between $40 and $70 per barrel.

Nearly every country that produces oil are ultimately a loser with the decline in price.  Oil prices are already reaching the marginal cost of production in most countries.

Russia whose oil and natural gas industries make up about 50 percent of budget revenue had to raise its interest rates for the fifth time this year to stem the decline in ruble which has fallen 44 percent against the US dollar year-to-date.

Meanwhile, the situation in Venezuela is worse with oil making up 96 percent of its export earnings.  Last year, the Venezuelan bolivar was devalued by 46 percent against the US dollar.  If oil prices continue to be weak, we could see another massive devaluation in the bolivar.

Overall, the clear winner is the global economy itself.  IMF estimates that for every 10 percent change in the price of oil, around 0.2 percent is added to global GDP.

Some countries stand to gain a lot more especially those that consume more oil than they produce.

China which is now the biggest net oil importer at around 6.6 million barrels of oil per day will gain the most in terms of net savings.  The more than $50 drop in the price of oil since June means that it stands to save $330 million per day or roughly $120 billion per year if prices are sustained at these levels.

India, the 4th largest net importer of oil, is the most economically sensitive to the price of oil. Oil is 37 percent of India’s total imports and is equivalent to 67 percent of its trade deficit.  We estimate that India would shrink its trade deficit by around 25 percent if oil prices remain at these levels.

Japan and South Korea, being the 3rd and 5th largest will likewise benefit from the significant drop in their oil import bill.

Philippines is forecasted to gain the most from weaker oil prices

The Philippine economy will gain the most from weaker oil prices according to two studies that came out last week.

According to a report from UBS’s macro strategy team, the Philippines will see the biggest impact on GDP levels.  After one year from a permanent $10 decline in oil prices, Philippine GDP is expected to increase by 0.6 percent from baseline levels.  Overall, they estimate that a $10 drop in prices will add about 0.2 percent to global GDP.

Meanwhile, a recent study from Oxford Economics showed the projected impact on 45 economies if oil prices fall to $40 per barrel.  According to the study, the Philippine economy is forecasted to gain the most from weaker oil prices. 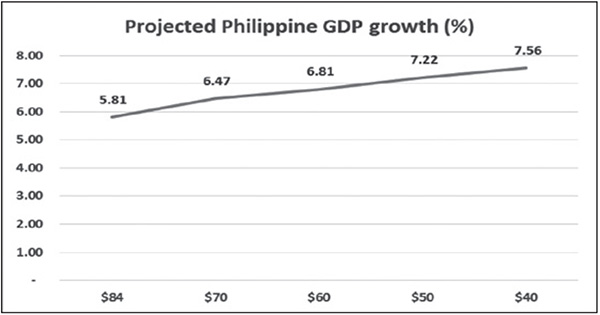 The US markets experienced its biggest weekly drop in three years with the benchmark S&P 500 index losing 2.9 percent for the week after oil prices failed to find a footing.   Energy shares which make up only 9 percent of the S&P 500 dragged the index down. The S&P 500 Energy index is down 16 percent year-to-date and is the only major S&P sector which is negative for the year.

Longer-term, however, there is no question that the trend of weaker oil prices is very positive for oil-importing countries.  In the case of the Philippines, we believe that investors are still underestimating its positive effect on consumers and businesses in terms of savings, higher purchasing power and consumer spending, as well as stable prices (inflation) and a sustained accommodative monetary environment.

Philequity Management is the exclusive distributor of the leading mutual funds in the Philippines. Visit www.philequity.net to learn more about Philequity’s managed funds or to view previous articles.  For inquiries or to send feedback, please call (02) 689-8080 or email ask@philequity.net.