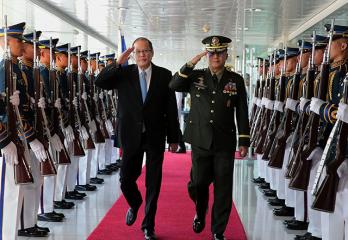 Security forces are working to minimize risks to passengers in the wake of a bomb explosion on a bus in Bukidnon on Tuesday, President Benigno Aquino III said on Friday.

In a meeting with reporters in Busan, South Korea, Aquino said the bomb attack — the second against a bus owned by Rural Transit Mindanao Inc. since November — has prompted authorities to “harden” terminals and buses against more bombs.

More security measures will also be put in place to screen passengers who are picked up along the bus route since they don’t have to undergo security checks at the bus terminals.

He added authorities are considering measures like baggage tags to identify luggage that has already been checked and screened for weapons, explosives, and other contraband.

“You can ride in the terminal, pero most of these threats happen in between the terminals. So itong passengers na ito, how do we protect these buses and the riding communities from people who get in the intermediate stops,” the president said.

“We are coming up with procedures to try and harden the target by minimizing the threats posed by passengers embarking beyond the terminals,” he said.

The explosion on the RTMI bus at Maramag, Bukidnon killed 10 people and injured 31 others.

Manipbil, whom authorities say is associated with the Bangamoro Islamic Freedom Fighters, remains at large.

The BIFF has denied involvement in the bombing. — JDS, GMA News