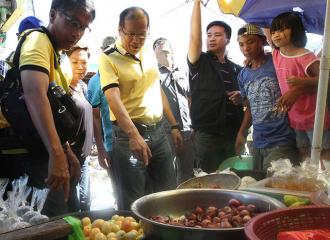 PNoy, Mar inspect prices of goods at Leyte market. President Benigno Aquino III and DILG Sec. Mar Roxas II check the prices of commodities at the Palo Public Market in Leyte on Monday, November 18, during their visit to Eastern Visayas to personally supervise the relief efforts for the victims of Typhoon Yolanda. Marcelino Pascua

President Benigno Aquino III on Tuesday said the government is working on the construction of bunkhouses for the victims of super typhoon Yolanda (Haiyan).

In an interview in Palo, Leyte on Monday, Communications Sec. Ricky Carandang also said they are working with the local government units to identify the land that can be used for the bunkhouses.

“Dito sa Palo, Leyte, and doon sa Tanauan … they say that they have found appropriate property that can be used to build temporary bunkhouses,” Carandang said.

Quoting Public Works Sec. Rogelio Singson, he said that once the areas have been identified, they can immediately start building the temporary bunkhouses.

“In the meantime, we are passing around tents and tarpaulins where they can take temporary shelter,” he said.

Aquino, during his visit to parts of Samar on Tuesday, also brought mats and tarpaulins to typhoon victims there.

Based on information provided by the the Department of Social Welfare and Development about the bunkhouses that are being constructed in Zamboanga City, the bunkhouses will have 12 rooms each and can accommodate 8,100 people.

Each bunkhouse is also supposed to have five cubicles for latrines and two bathing rooms.

The President, meanwhile, is expected to visit Ormoc City on Tuesday afternoon.

On Monday, he visited Tacloban, Palo, and Alangalang in Leyte.

He flew to Leyte on Sunday and said he won’t leave until he is satisfied with the situation.