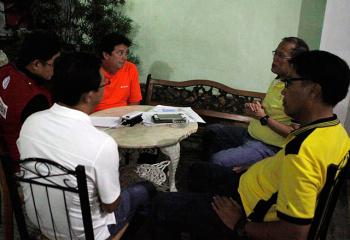 PNoy finally meets with Leyte officials. President Benigno Aquino III talks with Tacloban City Mayor Alfred Romualdez and other local officials to discuss alternative measures to hasten relief operations and rehabilitation efforts in the city and other municipalties in Leyte which were affected by super typhoon Yolanda. Gil Nartea

Heeding public calls for government officials to stop feuding and instead focus on relief operations, President Benigno Aquino III on Tuesday said that he met with Tacloban Mayor Alfred Romualdez and crafted a plan to Leyte get back on its feet.

During an interview with reporters at the Ormoc City Airport, Aquino said he met with Romualdez at least once to discuss the division of tasks between the local and national governments.

“Today nagkaroon ng kasulatan parang klaro-klaro, who does what? Para mapabilis nga yung pagbangon ng Tacloban and other areas in Leyte,” he said.

Romualdez is the nephew of Ilocos Norte Rep. Imelda Marcos, widow of the late President Ferdinand Marcos, who was the political rival of Aquino’s father, assassinated senator Benigno Aquino Jr.

Probe vs local officials not a priority

Aquino made the statement just a day after revealing that an investigation into the local government units’ handling of Yolanda preparations and response is ongoing.

But on Tuesday, Aquino said “the investigation can proceed at its phase” but that it is “one of the lower priorities.”

Earlier in the day, Malacañang said no one will be spared from the probe.

But it also said that now is not the time for it.

Aquino likewise said that they are more focused at the moment on improving the weather-related capabilities of the Department of Science and Technology, giving relief and medical attention to Yolanda victims, and restoring power and livelihoods to typhoon-affected areas. — Kimberly Jane Tan/BM, GMA News