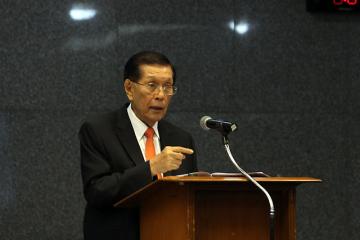 The head of the Presidential Legislative Liaison Office (PLLO) on Thursday admitted not being in good terms with resigned Senate President Juan Ponce Enrile but denied that it has caused the vetoing of bills in the 15th Congress.

Secretary Manuel Mamba, who acts as President Benigno Aquino III’s link to Congress, said local politics in Cagayan have caused a rift between himself and Enrile, who also hails from the same province.

“I can’t go directly to the Senate President. In a way, it has affected our coordination, but we tried for it not to be affected,” Mamba said in a phone interview Thursday.

He added that he once attempted to reach out to Enrile, but the resigned Senate leader supposedly declined his invitation to talk.

“I reported it to the President. Ang sinabi niya, basta, diyan ka. We just decided to let my undersecretary coordinate with the Senate. I’ll be the one concentrated with the House and the Palace,” Mamba said.

GMA News Online is still trying to reach Enrile for his comment on this issue as of posting time.

Acting Senate President Jinggoy Estrada, however, said he believes that the discord between Enrile and Mamba really took its toll on legislation this Congress.

“There is really a lack of coordination on the part of the PLLO. The PLLO head is not in good terms with the Senate President,” Estrada said in a separate press briefing.

He added that he only saw Mamba at the Senate only once, during deliberations on the sin tax bill.

Estrada likewise said the rift may have caused the vetoing of a number of bills passed by this Congress.

According to records from the House of Representatives, 66 bills have been vetoed by Aquino as of March 28.

Mamba, however, maintained that Aquino’s “meticulous” study of the bills passed by Congress, and not his strained relationship with Enrile, caused the vetoing of the measures.

Estrada also said that it might be better for President Aquino’s administration to replace Mamba as PLLO chief.