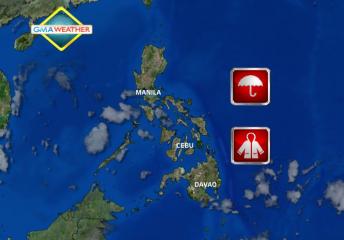 Rain from the inter-tropical convergence zone may affect parts of Eastern Visayas and Mindanao in the next 24 hours, state weather forecasters said Tuesday afternoon.

In its 5 p.m. bulletin, PAGASA said the ITCZ is mainly affecting Mindanao, even as it said Metro Manila and other parts of the country may expect isolated rain.

Angeles and Olongapo Cities may expect temperatures of 24 to 34 degrees Celsius.

The coastal waters throughout the archipelago will be slight to moderate, it added. — TJD, GMA News