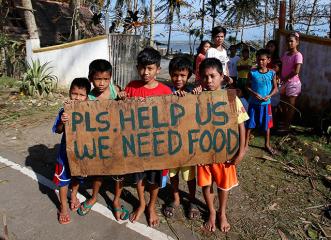 Ruby victims in Samar ask for food, water . Children display a placard asking for food from motorists in Dolores, Samar on Monday, December 8, after Typhoon Ruby (Hagupit) battered the island on December 6. At least 21 people were reported dead, many of them drowned as flood waters rose in Borongan, the main town in Eastern Samar, where Ruby made first landfall, the Philippine National Red Cross said on Monday. Authorities have evacuated more than a million people as the powerful typhoon approached the country from the Pacific, fearing a repeat of a super storm last year that left more than 7,000 dead or missing. Reuters/Erik De Castro

“The typhoon hit areas where poverty and vulnerability levels are very high, in particular within communities suffering the consequences of protracted armed conflicts,” said Paschal Mauchle, head of delegation of the International Committee of the Red Cross (ICRC) in the Philippines in a statement released on Tuesday.

Evacuation efforts and warnings conducted with the Philippine government helped minimize the number of casualties in “the third consecutive year that the Philippines has been hit by a major typhoon,” said Kari Isomaa, head of delegation of the International Federation of Red Cross and Red Crescent Societies in the Philippines.

A total of 27 deaths were noted by Red Cross on Tuesday morning.

Additional aid will be provided by both humanitarian agencies after their assessment teams verify the damage dealt to Samar, Southern Luzon, and other typhoon-hit areas.

“At this stage, we don’t know the full extent of the damage caused by Typhoon Hagupit. It will linger over the Philippines and we can expect incessant rains to continue for the next few days,” said Richard Gordon, Chairman of the Philippine Red Cross.

Mauchle added, “It is too early to give an accurate assessment of overall needs. Food, clean water, emergency shelter materials and primary health care could be among the priorities.”

Ruby was downgraded from a tropical storm to a tropical depression, and is expected to exit the Philippine Area of Responsibility by Wednesday. —Rie Takumi/KG, GMA News