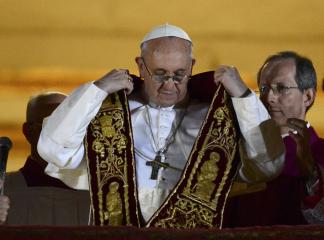 Pope Francis will be installed on March 19 at the Vatican. Newly elected Pope Francis, Cardinal Jorge Mario Bergoglio of Argentina appears on the balcony of St. Peter’s Basilica after being elected by the conclave of cardinals, at the Vatican, March 13, 2013. White smoke rose from the Sistine Chapel chimney and the bells of St. Peter’s Basilica rang out on Wednesday, signaling that Roman Catholic cardinals had elected a pope to succeed Benedict XVI. REUTERS/Dylan Martinez

Advocates of reproductive health (RH) and the lesbian, gay, bisexual and transgender (LGBT) community in the Philippines on Thursday said they do not expect any change in the Roman Catholic Church after the election of Pope Francis.

Danton Remoto of the Ladlad party-list, which represents the LGBT sector, said he expects the Roman Catholic Church’s leadership to remain “in the dark ages” with a Pope who openly opposed same-sex marriage.

“Si Pope Francis, siyempre he will just uphold the traditional Catholic dogma. That is expected of him. The Roman Catholic Church will never elect a pope who will bring it to the 21st century,” Remoto said in a phone interview.

As a cardinal in his home country, Pope Francis opposed a bill giving same-sex couples the opportunity to marry and adopt children, saying it can “seriously harm… the identity and survival of the family.” Argentina’s legislature eventually approved the measure.

Remoto said the new Pope’s concept of a traditional family with a father and a mother is already “obsolete.”

“This only shows how out of touch he [the Pope] is in this postmodern world. LGBTs have long been part of families. Even in our current society, LGBTs already serve as good parents. Kahit dito sa atin, LGBTs serve as good breadwinners, kahit iyong mga bakla sa parlor,” Remoto said.

Beth Angsioco, RH advocate and chairperson of the Democratic Socialist Women of the Philippines, agreed with Remoto’s view that change cannot be expected in the Roman Catholic Church under Pope Francis’ leadership.

Angsioco even described the new pontiff’s view on same-sex marriage and child adoption as “homophobic.”

Angsioco added that based on the new Pope’s previous pronouncements on RH issues, she does not see any “drastic difference” with the Church hierarchy’s stand on contraception.

The new Pope, when he was still cardinal, reportedly clashed with the government of Argentine President Cristina Fernandez de Kirchner on the issue of the free distribution of contraceptives in the South American country.

Other reports said the pontiff, much like his predecessor Pope Benedict XVI, agreed that contraception was permissible to prevent the spread of disease.

Angsioco likewise expressed hopes that Pope Francis will take the more liberal views on controversial issue, being the first Jesuit to assume the papacy.

“I can only hope that he [the Pope] takes the progressive side. Based on our experience here in the Philippines, may progressive Jesuit priests naman. Kaya may maliit na pag-asa ako na mas magiging less conservative siya and more compassionate,” the RH advocate said. — BM, GMA News