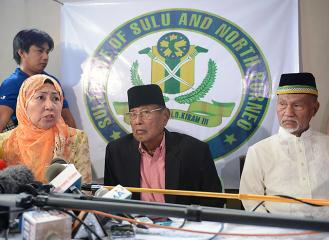 Sulu sultan scoffs at PNoy’s warning, remains defiant. Sitti Krishna Idjirami (left) sister of Jamalul Kiram III (center), the 74-year-old Sultan of Sulu, and Crown Prince Bantillan Kiram (right) speak at a press conference in Manila on Tuesday. President Benigno Aquino III has warned Jamalul Kiram III that he would face the ‘full force of the law’ if he did not withdraw his gunmen from Sabah, Malaysia, but the elderly ruler remained defiant. AFP/Ted Aljibe

Proper recognition as rightful owners of Sabah and a stop to human rights abuses allegedly committed on some of the Sultan’s followers are among the factors that could lead to the resolution of the ongoing standoff there, according to the wife of Sulu Sultan Jamalul Kiram III.

Hundreds of Kiram’s followers, some of them reportedly armed, remained holed up in Sabah even after the Tuesday midnight deadline set by Malaysia lapsed and despite an appeal from President Benigno Aquino III for them to leave the place.

During the interview, Fatima expressed the desire of their followers to be treated “like other Muslim brothers” and to benefit from the “fruits” of the land.

Asked to clarify what she meant by “fruit,” Fatima mentioned that it “doesn’t necessarily mean financial settlement outright.” What it is, according to her, is having a share in the income of the land.

She said the annual rent of 5,300 ringgit—or almost P77,000—paid by the Malaysian government to the Sultanate of Sulu is “not equitable.”

Fatima also said the right to settle in Sabah by the people of the Sultanate should be taken into consideration, citing human rights violations that could have further fueled the outrage of the men over territory issue.

Sultan Kiram had earlier expressed his willingness to talk to the Philippine and Malaysian governments regarding the standoff. However, he also stressed that their claim to Sabah is non-negotiable.

Meanwhile, asked during the interview regarding current developments among his followers in Sabah, the Sultan said the men are fine, and that they can weather factors such as hunger and thirst there.

He also said both the Philippine and Malaysian governments have yet to initiate a dialogue with him.

In a separate interview on “News to Go,” Foreign Affairs spokesperson Raul Hernandez said the agency is in constant coordination with the Malaysian government.

Hernandez said for how long the standoff will last depends on Kiram. “So basically siya ang may responsibility to make the decision kung hanggang kailan ang standoff na ito magpapatuloy.”

He noted that the government, as much as possible, wants the standoff to be over, and that the safety of the men is their utmost priority. — Gian Geronimo/KBK, GMA News