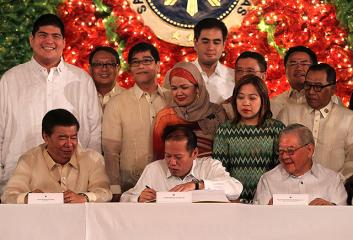 A former Iloilo congressman has once again asked the Supreme Court to declare as unconstitutional the P2.606-trillion 2015 national budget which was approved by President Benigno Aquino III earlier this week.

Only last month, Syjuco filed a similar petition when the 2015 national budget was not yet signed.

At the time, Syjuco said the National Expenditure Program (NEP) and 2015 General Appropriations bill were unconstitutional because they redefined the term “savings” to circumvent the SC decision against the acts and practices under the Disbursement Acceleration Program.

He pointed out that the Constitution defines “savings” as surplus in the budget after the completion or payment of a particular line item budget included in the general appropriations law.

He said money cannot be classified as “savings” when it has never been used in the first place.

In his latest petition, Syjuco said: “This we cannot accept without even lifting a finger. Hence, I am filing the present petition to stamp justice to every peso of the Filipino people which stand to be fiddled by unprincipled officials.”

He said the 2015 GAA also contains lump sum line items similar to allocations in the Priority Development Assistance Fund (PDAF) or pork barrel system, which had already been struck down as illegal by the high court in November 2013.

These lump sum items include: the President’s Special Purpose Funds (SPF) amounting to P501.67 billion or 29 percent of the 2015 budget; and the Grassroots Participatory Budgeting (GPB) amounting to P20.9 billion.

Syjuco said the appropriations do not indicate “discernible items” that may be subject to the President’s veto power, which would be in violation of the Philippine Constitution.

Syjuco also asked the high court to determine whether administrative and criminal actions should be filed against respondents herein for their willful and unlawful acts in violation of the Constitution.

On Tuesday, President Aquino signed the P2.606-trillion national budget, which contained a modified definition of savings after the SC ruled the administration’s DAP as partly unconstitutional.

The 2015 national budget is 15.1 percent higher than the budget this year.

Aquino said the budget has safeguards to ensure that public funds will not end up in the pockets of government officials.

He added that the 2015 budget requires government agencies to submit reports to Congress on how they spent their respective allocations.

He reiterated that the government had already gotten rid of special allotment release orders (SAROs), which used to authorize the release of lump sum funds.

In his original petition filed in November, Syjuco had already claimed that lump sum amounts in the NEP can be considered PDAF, similar to the pork barrel system.

Syjuco said both the 2015 GAA and the NEP, which is intended to be the basis for Congress to pass the national budget, should be declared unconstitutional.

Syjuco also questioned the P251.78 billion estimated savings for 2014, which he said is greater than the actual amount spent for the 116 projects under the Disbursement Acceleration Program .

The Supreme Court’s ruling on DAP defined savings as unused funds at the end of the fiscal year.

In particular, the high court has ruled that cross-border transfer of “savings” to augment the budget of different offices outside the Executive Branch of government was deemed illegal.

“The present administration is attempting to circumvent the ruling of the Supreme Court declaring the Disbursement Acceleration Program to be unconstitutional. Hence, they are giving the rotten DAP a new party dress for its camouflaged implementation,” the original petition read.

Syjuco, who served as congressman of the second district of Iloilo from 1998 to 2004, is a a known political rival of Drilon. In 2013, Syjuco sought but failed to have Drilon cited by the Supreme Court in contempt for  filing a resolution seeking to realign pork barrel funds for calamity victims.

Syjuco had likewise claimed Drilon and several others engaged in vote-buying activities during the 2013 midterm elections. The Commission on Elections dismissed Syjuco’s accusations last November.

Earlier this month, Syjuco also accused Abad before the Office of the Ombudsman of misappropriating public funds for projects, activities and programs not included in the national budget in 2013. — RSJ, GMA News