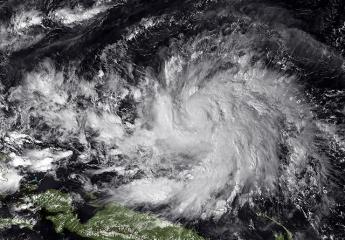 PHL braces for Typhoon Hagupit . A National Oceanic and Atmospheric Administration (NOAA) image taken by MTSAT-2 at 0530Z on Tuesday, December 2, shows Typhoon Hagupit moving west at 20 mph southwest of the eastern Caroline Islands in the western Pacific Ocean while strengthening to Super Typhoon status forecast later this week. Survivors of super typhoon Yolanda that killed thousands in the central Philippines last year are preparing for the powerful new storm, as authorities scrambled to find safe evacuation centers. Hagupit is building strength in the Pacific Ocean as it moves toward PHL where farming and fishing communities have yet to recover from the previous devastation. AFP/NOAA

Schools and government offices were shut in parts of the central Philippines on Thursday and residents stocked up on supplies and food, as provinces yet to recover from last year’s devastating super typhoon Yolanda (Haiyan) braced for another category 5 storm.

Typhoon Ruby (Hagupit) was churning across the Pacific around 860 km (585 miles) east of the island nation on Thursday, the local weather bureau said, packing winds of up to 195 kph (120 mph) with gusts of up to 230 kph.

It was expected to strengthen to a category 5 storm before slamming into Eastern Samar on Saturday, the weather bureau said.

Eastern Samar and the island of Leyte were worst-hit in November last year by Yolanda, one of the strongest storms ever to make landfall. Yolanda left more than 7,000 dead or missing and more than 4 million homeless or with damaged houses.

“All radios and televisions are open, cell phones are being charged. People are buying food stuff, preparing fuel and gasoline supply,” Mercado said in a radio interview. “People are now conscious of preparations.”

The government earlier said it had moved to Manila the Asia-Pacific Economic Cooperation (APEC) informal senior officials meeting set for Dec. 8 to 9 in Legazpi City in Albay province, near the likely path of the typhoon.

While the local weather bureau and the Japan Meteorological Agency predicted Ruby making a direct hit on the central Philippines, the forecasting website Tropical Storm Risk and the Joint Typhoon Warning Center of the US navy showed the storm veering north, closer to Manila.

The Southeast Asian country was hardest hit by extreme weather in 2013, said a report by a German government-funded think-tank Germanwatch.

Concerns over extreme weather have been exacerbated by an apparent shift in storm paths, with southern regions hit by powerful typhoons in the past three years. About 20 typhoons strike the country each year, most hitting the north along the main island of Luzon. — Reuters