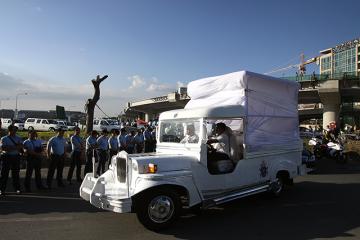 Dry run for Pope Francis arrival starts. One of three Popemobiles for the five-day visit of Pope Francis to the Philippines arrives at Villamor Airbase in Pasay City on Monday, January 12, for simulation and dry run. The Pope will be in the country from January 15 to 19, a trip that will be highlighted by visits to disaster-hit Tacloban City and Palo town in Leyte. Danny Pata

Some passengers along a portion of Manila’s Taft Avenue were stranded Monday evening while authorities simulated Pope Francis’ Jan. 15 arrival.

A Vine video tweeted by radio dzBB’s Manny Vargas showed people waiting for a ride at Taft Avenue near the Apostolic Nunciature.

The video showed many people choosing to walk while police deployed along the expected papal convoy route.

Police asked the public in the area for understanding, saying it was a dry run to ensure the Pope’s safety when he arrives Jan. 15.

The area was reopened to traffic at about 7 p.m.

Earlier, the Metropolitan Manila Development Authority said the roads in the path from Villamor Air Base to the Nunciature – where the pope will stay during his visit – would be closed 5 p.m. in time for the dry run at 6 p.m.