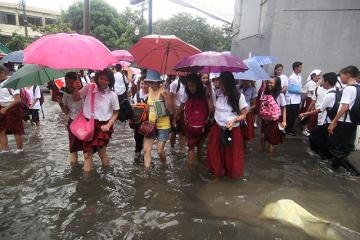 DepEd suspends classes in some NCR schools due to floods. Students of Araullo High School wade in knee-deep flood along Taft Avenue in Manila after an hour of heavy downpour on Thursday, June 13. Some classes in elementary and high school levels have been suspended by the DepEd due to flooded Metro Manila streets. Danny Pata

Umali said the late announcements resulted in them getting stranded in the streets and soaked in the rain and floods.

While local government units canceled afternoon and evening classes, many students had already been stranded by then. —KG, GMA News