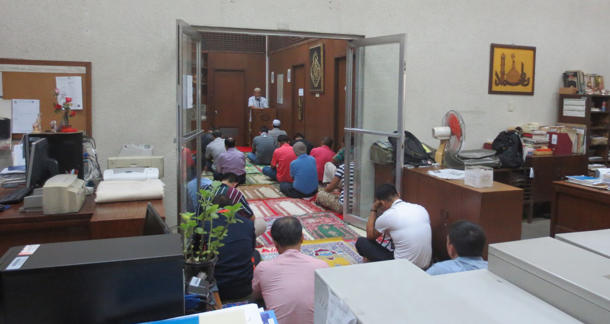 Within the University of the Philippines-Diliman campus already stand two churches: the Parish of the Holy Sacrifice for Catholics and the Church of the Risen Lord for Protestants.

Members of the UP Muslim community advocating for a proper worship area have used the cases of the two churches to push for their right to establish their own prayer place. But for many times and several reasons, they were denied.

The 1987 Constitution mandates the separation of the Church and State. As a state university that is secular in nature, can UP have a masjid or mosque within its campus without violating the Constitution?

Lawyer Theodore Te, former vice president for legal affairs of the UP system and current chief of the Public Information Office of the Supreme Court, said the possible objection to the establishment of a mosque at UP would be that the university might “either be favoring or establishing a religion.”

But he also said, “I think the argument already loses force because there is already a Catholic church (and) a Protestant chapel.”

Established in 1955, the Holy Sacrifice was originally a chaplaincy, giving spiritual service and religious instruction, but not catering to a specific denomination. That is no longer the case. Occupying a 10,000-square-meter lot, the parish under the Roman Catholic Diocese of Cubao renewed last year its contract of lease with the university until February 2014—after it expired nine years ago.

A 2004 Department of Justice opinion, issued on the request of then UP President Francisco Nemenzo, stated that conditions of the lease with the diocese should “not be merely nominal but real and actual,” and that the “same privilege of leasing a portion of the UP campus is accorded every other religious sect or denomination, without distinction and without exception.”

The structure was designed by the late National Artist for Architecture, Leandro Locsin, who was among five national artists who worked on the project.

Despite the existence of the Catholic and Protestant churches within UP Diliman, the proposal to have a third place of worship, this time a mosque being suggested by the UP Muslim community, has been turned down.

The UP administration felt that the two churches are already “wrong” by their nature, said Abdel Disangcopan, former president of MSA.

As the two churches now stand on government land, the primary objection would be the use of these public lands for religious structures.

As a government institution, UP is not allowed to appropriate property for any religious sect, church or denomination. The two churches in Diliman at present are on areas classified under “community services,” according to the UP Diliman Land Use Plan. As leased properties, however, they perform functions of commercial entities paying for rent.

In 2004, then Chancellor Emerlinda Roman informed the UP Diliman Masjid Foundation that the Land Use Plan could no longer accommodate a place for worship. Approved in 1994, the problem with the plan, according to Te, is that it is “outdated.”

Still, several locations were pegged in line with the proposals. For the mushallah complex, a piece of land near the College of Fine Arts was offered by the administration. However, illegal settlers occupied the area and the plan never pushed through.

“Personally, I think UP was giving us the problem already of asking the informal settlers to leave,” said Maharlika Alonto, former treasurer-in-trust of the foundation.

Another location near the Arboretum, a manmade forest area near Commonwealth Avenue, was suggested, but it too had the same setback.

“The Muslim community refused it because the masjid would be used to remove the illegal settlers,” said Shahana Abdulwahid, former student regent of the university.

In 2008, the south part of the Romulo compound where IIS stands was also seen as a viable option. However, with the construction of the GT Toyota Asian Cultural Center as a centennial project and the transfer of most of the Asian Center to the new premises, the institute was left in the dark and gloomy Romulo Hall.

The 38-year-old stone building was designed by National Artist Juan Nakpil as his last architectural project for UP Diliman. Considered a heritage site, Romulo Hall is undergoing inspections and structural planning on whether it is still safe for occupancy.

Like the building itself, the current state of the institute that it houses has been sturdy outside, but is beginning to break apart. Having only one classroom serving multiple purposes, and very limited facilities, IIS is also in great need. Aside from being makeshift prayer room for Friday worship, the institute itself serves as a venue for the UP Muslim community to celebrate Islamic events, especially the Eid al-Fitr or end of Ramadan. When the institute fails to accommodate the number of guests, they are forced to rent another building in the campus.

With only 47 students at the master’s level this semester, the demand may seem small, but still persists in the only Islamic institute in Luzon that offers Islamic studies as a social science.

Poor facilities have affected ingress of students, and the number of faculty is decreasing. Today, IIS has two regular faculty members and eight lecturers. The institute could not fulfill its vision of promoting cultural and religious diversity when it lacks the resources and attention that it deserves.

“I think the state really needs to give support to Islamic Studies in UP,” said IIS Dean Julkipli Wadi. “We are struggling here.”

Along with IIS, the proposal for a decent prayer area faces its own struggles. Despite the strong earlier movements, it slowly came to a standstill. UP MSA, which was originally at the forefront of the masjid and mushallah proposals, has not been as active in the cause since 2009.

Al-Rasheed Tanggol, who was the last MSA president to push the proposal, said it was already difficult by 2009 because the student members of the Masjid Foundation and former leaders had already graduated.

The proposal began to die. The Securities and Exchange Commission’s license for the UPD Masjid Foundation was never renewed.

“The clamor isn’t as apparent anymore, but the need is still there, maybe even bigger now,” according to Tanggol.

According to Ashley Usman, the organization’s current president, all plans for the masjid have been turned over to the IIS.

But long before the proposal landed on the institute’s hands, the role of IIS in the masjid movement has been unclear.

“At some point, they (the IIS) also had a different proposal and they’re focusing on the provision of additional classrooms,” Rommel Romato, former secretary of the board of the foundation and now based in London, said in an interview.

Former IIS dean Carmen Abubakar had strongly backed the UP Diliman Masjid Foundation’s position for a stand-alone prayer area, but the succeeding deans have taken a different position.

Usman said when she last spoke with Wadi in November last year, she was told there were ongoing meetings between IIS and the UP administration for a new building for IIS, and possibly a cultural center for the Islamic Studies.

Wadi would not give details, saying only that the structure would house the administrative and academic components of the institute, and possibly a multipurpose hall, which may be for prayer purposes.

He said incorporating the prayer area to the proposed new IIS building is a better option than a mosque.

“The MSA wants a separate mosque, but that’s difficult because it would need another space. The Islamic Studies also needs space. Why not just merge them?” Wadi asked.

In terms of legality, Te sees a multipurpose hall as the best solution. “I think really the solution for the Muslim mosque proponents is to come up with a multifunctional structure that is not a mosque per se but can be used as a mosque,” he said.

Despite the setbacks through the years, the proponents remain hopeful something positive would come out of their proposal, though now watered down.

Romato said the main goal still stands: a proper prayer area for the UP Muslim community.

Said an even more optimistic Disangcopan: “I think the question is when, not if.”

(This report was submitted as a requirement of the authors’ Investigative Journalism class under VERA Files trustee and UP professor Yvonne T. Chua. VERA Files is put out by senior journalists taking a deeper look at current issues. VERA is Latin for true.)