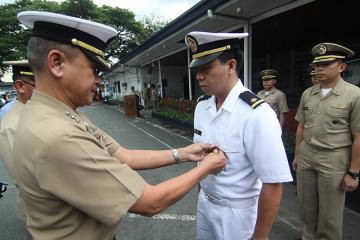 When Ensign Marlon Bo, a naval reserve officer, boarded Cebu Pacific’s Flight 5J-971 as a passenger on June 2, he didn’t know he’d emerge from it a hero.

Bo was the “Captain Bok” referred to by the flight’s passengers who they said helped maintain calm after the plane skidded off the runway of the Davao International Airport on that day.

“They thought I was the captain,” a visibly happy Bo told GMA News Online on Friday. “But I was actually wearing shorts and sandals that time.”

For his deeds, the Philippine Navy awarded Bo with the Military Commendation Medal at the Navy Reserve Command Headquarters in Intramuros.

Bo was mentioned in a personal account of one of the passengers, describing him as a “guiding voice” at the time of the incident, which paralyzed the operations of the Davao airport for almost two days.

“It took the courage of one person, whom we only know as Captain Bok from the Philippine Navy, to stand up and calm everyone down. He knew what he was doing and he was in control even when the cabin crew looked like they were really at a loss about what to do,” Nino Ruel Alinsub said on his Facebook status.

Asked why the passengers called him captain, Bo said they thought he was the pilot for guiding them to safety.

He also laughed at how he was called “Bok,” when his surname was “Bo,” noting that the passengers may have misheard him over the noise.

Bo recounted how he took the initiative to calm down the passengers, who started panicking when they smelled smoke coming from the plane’s engine.

Bo said he felt like a “David” against a “Goliath” that time, referring to the popular Biblical story, since he was not the right person to lead the passengers.

“I was actually in the wrong place at a wrong time,” he said.

Using his training in crisis management, Bo said he then decided to be the leader in the crisis situation.

“The passengers should trust me first… After I established my credibility, all my instructions were being followed,” he said.

Bo said he directed the passengers to leave the airplane row by row, the children and pregnant women first, to prevent the plane from tilting.

He added that he kept the passengers busy by counting them out loud to distract them from panicking.

Lt. Commander Gregory Pavic, Philippine Navy spokesperson, said Bo was given the award for his “leadership qualities and presence of mind.”

“He really was the guiding voice of the passengers,” Pavic said.

He, however, said Bo will not be promoted or granted “special treatment” for his actions.

But for Bo, the award should be shared with the “unsung heroes” from the passengers that time who helped him in leading the others to safety.

“I just tried to help the situation. To tell you frankly, hindi lang ako ‘yung dapat makausap. There were a lot of unsung heroes,” he said.

Bo said that the first rule in crisis management is learning how to calm down.

“Bravery is not the absence of fear. It is the ability to control that fear,” he shared. — KBK, GMA News