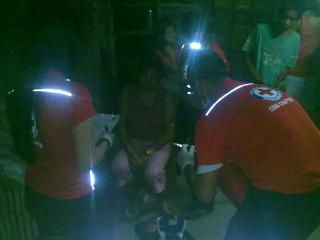 Red Cross personnel attend to survivors of ships’ collision. Survivors of the collision between two ships near the Cebu International Port in waters off the towns of Talisay and Cordova are attended to be personnel of the Philippine Red Cross. GMA News – Cebu

At least 274 passengers are still missing as of 7 a.m. Saturday from the collision of a passenger ship and a cargo vessel off Cebu Friday night, the National Disaster Risk Reduction and Management Council said.

In its 7 a.m. update, the NDRRMC indicated the missing are from the MV Saint Thomas Aquinas of 2GO Shipping, as the crew of the MV Suplicio Express 7 are accounted for.

The NDRRMC said the 38 crewmembers of the MV Sulpicio Express 7 are “all safe and accounted for.”

Search and rescue operations are still ongoing, with the Coast Guard, Bureau of Fire Protection, Armed Forces of the Philippines, Philippine Navy, and Department of Health taking part in the efforts.

Volunteer groups are also helping in the search and rescue efforts.

Management of 2GO provided relief assistance including temporary shelter to 300 survivors at the passengers’ terminal of Pier 4.

Other survivors were billeted at Subutel and Stella Marie Hotel, while other survivors in Talisay City stayed at Sitio Salvador Chapel.  — ELR, GMA News