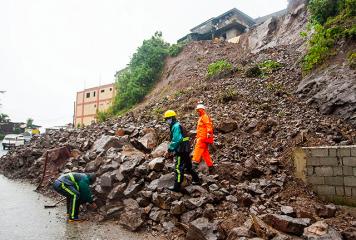 Labuyo causes landslides, flood in Baguio. Rescuers clear debris from a road after a landslide that occurred at the height of Typhoon Labuyo (Utor) in Baguio City on Monday, August 12. The strongest typhoon to hit the Philippines this year triggered landslides and floods, disrupting power and communication links, leaving one person dead and 13 fishermen missing. Reuters

The death toll from Typhoon Labuyo rose to seven Wednesday afternoon, with a resident of Isabela being the latest fatality, the National Disaster Risk Reduction and Management Council said Wednesday.

The NDRRMC’s 3 p.m. update said that five people were missing while at least seven were injured.

It likewise noted a “significant increase” in the number of affected families or persons in Cagayan Valley.

As of Wednesday afternoon, 29 roads were still impassable,including 14 in Cordillera, 12 in Central Luzon, and one each in Ilocos and Cagayan Valley.

The NDRRMC said 13 bridges were rendered impassable, while power outages were still experienced in Nueva Vizcaya, Isabela and Quirino in Cagayan Valley; Aurora and Nueva Ecija in Central Luzon; and Ifugao, Kalinga, Mountain Province and Baguio City in Cordillera.

Communications were still bogged down in Dipaculao, Dinalungan and Casiguran in Aurora.

Meanwhile, a separate dzBB report said relief goods were brought to the areas in Aurora that were isolated by Labuyo.

Another report by dzBB’s Allan Gatus said that PAGASA’s weather observation station in Casiguran, one of the areas hit hardest by Labuyo, suffered damage.

Families whose houses were destroyed by Typhoon Labuyo (Utor) may get up to P5,000 in home material assistance from the National Housing Authority, Vice President Jejomar Binay said Wednesday.

Earlier, Binay said members of the Home Development Mutual (Pag-IBIG) Fund who were affected by Typhoon Labuyo may file for calamity loans equivalent to 80 percent of their savings in the Fund.

The loan is payable over a period of 24 months at an interest rate of 5.95 percent per annum.

Members availing of the calamity loan also have the option to defer their first payment up to three months from the release of the loan and pay their first monthly amortization on the fourth month. — BM, GMA News