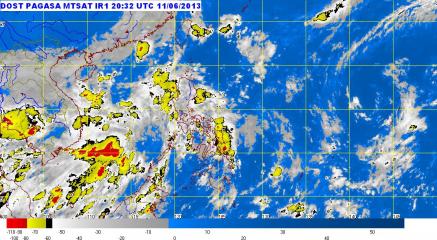 Rain from the southwest monsoon may fall over parts of Luzon and Visayas on Wednesday, even as state weather forecasters continued to monitor a potential low-pressure area off Palawan.

Earlier, PAGASA had said the potential LPA may bring rain but is not likely to become a cyclone.

But it will still be hot in Tuguegarao City, which PAGASA said may expect temperatures of 26 to 37 degrees Celsius.

PAGASA’s 5 a.m. bulletin indicated the southwest monsoon is affecting the western sections of Luzon and Visayas.

In its weather outlook for June, PAGASA said that in addition Tropical Storm Dante, one to two more cyclones may enter the Philippine area of responsibility this month.

“The weather systems that are likely to affect the country for June are the southwest monsoon, inter-tropical convergence zone, low-pressure areas, ridge of high-pressure areas and two or three tropical cyclones to enter the Philippine area of responsibility,” PAGASA OIC administrator Vicente Malano said in a weather outlook dated June 5.

He added rainfall conditions may “generally near normal” this month, though some areas in Central and eastern Luzon may get above normal rainfall, while parts of northern Mindanao, Central Visayas and even Mindoro may have below normal rainfall.

However, Malano still advised the public to “take precautionary measures against floods and rain-induced landslides, particularly over the western sections of the country.”

Also, the weather service said most parts of the country may expect “slightly cooler than normal” temperatures. The predicted temperature ranges for June may include: