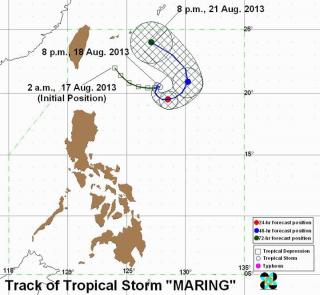 ‘Erratic’ Maring lingers northeast of Batanes. Tropical Storm Maring seemed to make a U-turn over the Pacific Ocean section northeast of the Philippines and east of Taiwan. PAGASA

PAGASA, in its 11 p.m. advisory, said Tropical Storm Maring was estimated to be 600 km east of Itbayat, Batanes as of 10 p.m.

On Thursday evening, it is forecast to be 595 km north of Itbayat, Batanes or outside the Philippine area of responsibility.

Maring packed maximum winds of 85 kph near the center, with gustiness of up to 100 kph.

No public storm signals have been raised.

Maring may bring rainfall of 10 to 25 mm per hour (heavy to intense) within its 400-km diameter.

It will also continue to enhance the southwest monsoon, which will bring moderate to heavy rainshowers and thunderstorms over Luzon, particularly over the western section.

The enhanced monsoon has been bringing rain over Metro Manila and nearby provinces since Sunday.

Meanwhile, PAGASA advised fishermen, “especially those using small seacraft,” not to venture out over the seaboards of Luzon due to heavy seas, also caused by the enhanced southwest monsoon. — DVM, GMA News