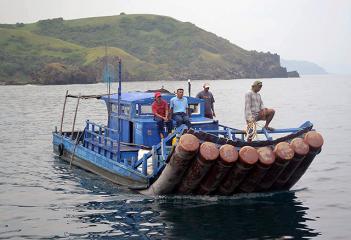 Philippine police said Saturday there was strong evidence to charge a Taiwanese fisherman detained after he strayed into the archipelago’s waters — an incident that is threatening reviving relations between the neighbours.

Government prosecutors are preparing poaching charges against Tsai Po who was held on Tuesday near the Philippines’ Batan Islands, close to the maritime border with Taiwan, police officer Victor de Sagon said.

Police allege that Tsai, 54, intentionally entered Philippine waters and then tried to flee when a maritime fishing patrol approached him.

“Our evidence is quite strong. He was collecting lobster, ornamental fish and sharks,” de Sagon told AFP.

“It is obvious he was fleeing with the great speed. He did not drift here.”

Tsai has made frequent visits to the area to poach for fish, de Sagon said, adding that was how officials knew where to catch him.

Tsai, who is being held at Batan provincial police station, has said he does not know why he was detained and that he had been in Taiwanese waters when the incident happened.

He also claims he was treated roughly by the Philippine maritime patrol, an allegation de Sagon denies.

Tsai has had his catch, vessel and fishing equipment seized. If he is convicted of poaching he faces a US$100,000 fine and his seized items will not be returned.

The arrest followed a diplomatic row triggered by the shooting to death of a 65-year-old crew member of a Taiwanese fishing boat onMay 9 by a Filipino coastguard patrol.

Taiwan responded with sanctions, including a ban on the hiring of new Filipino workers.
The neighbours began repairing the rift after Filipino authorities in August recommended homicide charges against the coastguards, and Taiwan lifted its sanctions.

The shooting occurred in waters also claimed by Taiwan near the Batan Islands. — Agence France-Presse