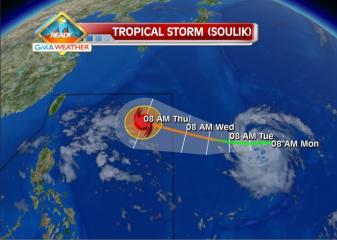 As Typhoon Soulik continued to approach the Philippines Wednesday morning, officials of the Office of Civil Defense in seven regions, including Metro Manila, were instructed to adopt the needed precautions.

The National Disaster Risk Reduction and Management Council had the OCD prepare for the possibility of heavy rain from Soulik, which would be codenamed “Huaning” once it enters the Philippine area of responsibility (PAR).

PAGASA earlier said Soulik had intensified into a typhoon and continues to gain strength while approaching Northern Luzon, and may enhance the southwest monsoon.

Coast Guard spokesman Lt. Cmdr. Armand Balilo said the units in Northern Luzon are to go around coastal areas and dissuade fishermen from going out to sea at this time.

PAGASA said Soulik is expected to enter the Philippine area of responsibility as early as 10 a.m. Wednesday. — LBG, GMA News

Tropical Storm Soulik forecast track as of 8Jul2013. The Weather Central forecast track for Soulik as of 8am Monday shows that the tropical storm may enter the northeastern corner of the Philippine Area of Responsibility by Wednesday. GMA News Tropical Storm Soulik intensified anew Monday afternoon as it moved closer to the Philippine Area of Responsibility, state weather forecasters said. In a radio interview, PAGASA forecaster Gladys Saludes said Soulik is  expected to enter the PAR Wednesday afternoon. “Bahagya ito lumakas… by Wednesday afternoon papasok ito ng Philippine Aea of Responsibility,” Saludes told dzBB radio. Once it does, she said the tropical storm will be locally codenamed Huaning. She said the storm is expected to enhance the southwest monsoon. Saludes said that as of 5 p.m., Soulik was estimated at 2,010 km east of Basco, Batanes, packing maximum sustained winds of 85 kph and gustiness of up to 100 kph. It is moving west at 20 kph, she added. “Maghahatak ito ng habagat sa Huwebes,” she said. The Japan Meteorological Agency, meanwhile, projected that Soulik may continue to move west. Tuesday outlook PAGASA’s 5 p.m. bulletin said the Intertropical Convergence Zone will continue to affect Palawan and Mindanao. “Light to moderate winds blowing from the east to southeast will prevail over Luzon and coming from the east to northeast over Visayas and Mindanao. The coastal waters throughout the archipelago will be slight to moderate,” it said. — RSJ, GMA News