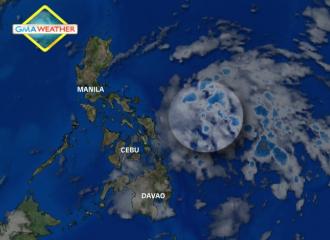 A potential cyclone is now inside the Philippine area of responsibility and may head towards Mindanao, state weather forecasters said Thursday.

PAGASA forecaster Alvin Pura said the LPA formed inside the Philippine area of responsibility (PAR) Thursday morning and is embedded within the inter-tropical convergence zone (ITCZ).

But he said there is still no storm signal raised yet, as PAGASA is still monitoring the LPA to see whether or not it will intensify into a cyclone.

Should it become a cyclone, it will be locally codenamed Dante.

Meanwhile, PAGASA forecaster Joey Figuracion said that there is also a chance that the disturbance may veer north towards Taiwan.

Flashflood, landslide warnings up in Mindanao

PAGASA’s 11 a.m. advisory said the LPA and the ITCZ may trigger flash floods and landslides in Mindanao.

It said that, as of 8 a.m., the LPA was estimated at 580 km east of Hinatuan, Surigao Del Sur, embedded in the ITCZ.

“These weather systems will affect the Bicol region, Visayas and Mindanao,” it said, adding the whole Mindanao “will experience cloudy skies with moderate to heavy rains and thunderstorms which may trigger flash floods and landslides.”

“Residents in these areas are advised to take all the necessary precautionary measures,” it added.

Some residents of Davao City were preemptively evacuated from their homes Wednesday night as heavy rain caused floods in several parts of the city.

The water level at Balusong River started to overflow as of 10:30 p.m., said the city government’s disaster risk reduction and management council in a post on its Facebook page.

It also noted persistent rain in the uplands.

No one was initially reported injured or missing in the wake of the floods.

PAGASA has not yet declared the official start of the rainy season, but has said that rains from the LPA coming in from the East may usher in the season. —With a report from Amanda Fernandez/KG/TJD, GMA News