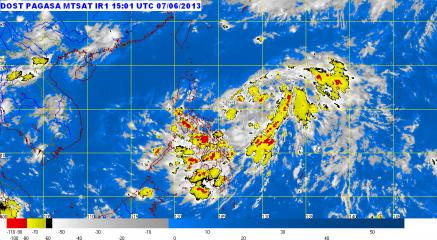 Tropical Depression ‘Dante’ brings rain, thunderstorms. “Dante” has maximum near center winds of 45 kilometers per hour, but is too far to directly affect any part of the country. As of 10:00 p.m. Friday its estimated location was 800 kilometers east of Baler, Aurora. PAGASA

“Ito ay inaasahang magpapaulan (It will cause rain),” Mendoza said in an interview on dzBB radio, but noted no storm warning signals have so far been raised.

“Dante” maintained its near center winds of 45 kph and is forecast to move north-northwest at 11 kph.

It added Bicol and the rest of Mindanao will have cloudy skies with light to moderate rain showers and thunderstorms.

Metro Manila and the rest of Luzon will be “partly cloudy with isolated rainshowers or thunderstorms mostly in the afternoon or evening,” it added.

PAGASA also said moderate to occasionally strong winds from the northwest to west will prevail over Eastern Luzon and coming from the southwest over Palawan and the western section of Visayas and Mindanao.

The coastal waters along these areas will be moderate to occasionally rough, it said.  — ELR, GMA News