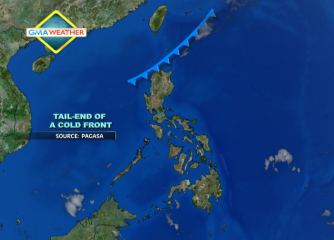 PAGASA, in its 5 p.m. bulletin, said the tail-end of a cold front is still affecting Northern Luzon but may cause isolated rain showers or thunderstorms in the next 24 hours.

“Cagayan Valley region and the provinces of Ilocos Norte and Apayao will experience cloudy skies with light rains. Metro Manila and the rest of the country will have partly cloudy skies with isolated rainshowers or thunderstorms,” it said.

In its extended outlook, PAGASA said Metro Manila may expect “partly cloudy skies with brief rain” with temperatures ranging from 23 to 34 degrees Celsius.

But for Saturday and Sunday, it said Metro Manila may expect partly cloudy skies with brief rain.

Meanwhile, PAGASA said moderate to strong winds blowing from the northeast will prevail over Northern Luzon and its coastal waters will be moderate to rough.

Meanwhile, PAGASA said strong to gale-force winds associated with the northeasterly winds may affect the seaboards of Northern Luzon.

“Fishing boats and other small seacrafts are advised not to venture out into the sea while larger sea vessels are alerted against big waves,” it said. — TJD, GMA News