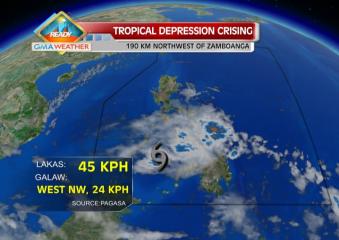 The death toll from Tropical Depression Crising rose to two as of Thursday morning, the National Disaster Risk Reduction and Management Council said.

In its 6 a.m. update, the NDRRMC said the most recent fatality was Erwin Campana, 43, who drowned while crossing a river in Montevista town’s Barangay Camansi in Compostela Valley.

Earlier, the NDRRMC said the other fatality – Francisco Digaynon – drowned while crossing the Taytayan River in Barangay Andap in New Bataan, Compostela Valley.

Moreover, the NDRRMC said the number of missing people also rose to two. The latest was identified as Suden Abdullah, who went missing while on his way home.

It said Abdullah, a resident of Barangay Pinol in Maitum in Sarangani province, was on his way home from fishing when his boat encountered big waves.

Of these, 864 families or 3,950 people were brought to seven evacuation centers.

At least seven roads and six bridges were affected in Regions 8, 10, 11, and 12. The NDRRMC also said at least two houses in Regions 10 and 11 were destroyed while 85 were damaged.

Meanwhile, the Department of Social Welfare and Development recorded 23,000 affected families, DSWD-Disaster Risk Reduction and Response Operations Office Dir. Resty Macuto said in an interview on “Kape at Balita” on Thursday. Of these, 1,387 families were brought to evacuation centers.

Macuto added that there were still six families evacuated in Dipolog City, and about 738 in Region 11.

As of 4 a.m. Thursday, PAGASA said Crising was estimated at 450 km northwest of Zamboanga City, with maximum winds of 45 kph near the center.

By Friday afternoon, it is expected to be 590 km southwest of Puerto Princesa City, PAGASA said in its 5 a.m. advisory.

Meanwhile, PAGASA reminded residents in low-lying and mountainous areas under Storm Signal 1 to be alert against possible flash floods and landslides.

It said Crising may bring rainfall of 5 to 15 mm per hour (moderate to heavy) over MIMAROPA, CALABARZON, Bicol, Eastern Visayas, Caraga and Northern Mindanao.

Before dawn Thursday, the Davao City government alerted residents in parts of Davao City to prepare for possible evacuation, as  there was a “noticeable” increase in water level and speed of the Davao River.  — with Carmela Lapeña /LBG, GMA News